It’s been a while since I blogged. I’ll be honest, I just haven’t been able to since losing Hayley. For the first couple of months, I pretty much ignored the boys completely. Erik basically took care of them 100% for which I feel really guilty, but I just couldn’t make myself. In the beginning we did do a nightly treat session, but it got cold and I just found myself staying inside while he fed without complaint. I still feel super guilty. 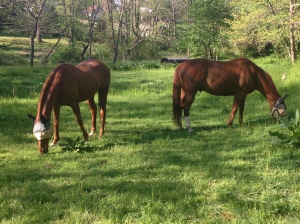 Somewhere in the middle of the arctic tundra winter we had I did start making myself go out and feed and the boys, Subi in particular, were thrilled to see me. More guilt but it’s done and over with. In the end, the boys emerged from winter pretty much unscathed. Batt is fat and Subi gained a lot of weight. Fat, no, but fat for him. 3 meals of day (2 grain, 1 alfalfa cube/beet pulp meal) really suits him. Batt on the other hand… 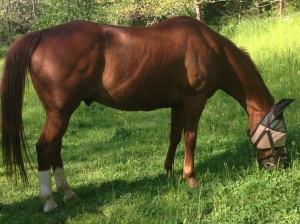 I’ve been slowly working the boys again. Subi’s had his moments but overall, he’s been pretty good. Not too much riding but good work on the line and he’s been good for our development “trail” rides. He’s still his crazy self though, even at 18. I haven’t done too much with Batt mostly because I’m struggling with the 2 horse combo versus the 3 horse combo. Subi cannot stay alone in the field without panicking and freaking out and I’m afraid he’s going to kill himself. We’re going to pick up a gate for the shed to create a stall when necessary so I hope that helps. He won’t be able to jump out of the stall (lets hope he doesn’t try) whereas the field, I’m afraid he’d try. Hopefully with some hay (if I have to buy 10 bales of alfalfa as special “stall hay” for him, I will), I can start working Batt in the round pen. I may ask the vet about drugs as well if necessary. But Batt needs to work and it’s too hard to have Erik graze Subi while i work Batt because if Subi starts with any antics, Erik gets worried. 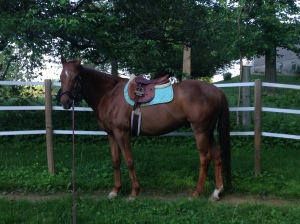 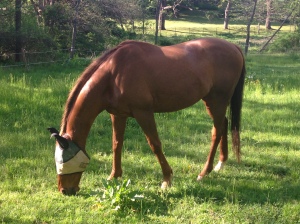 The boys have been divas about the bugs lately which is making life more interesting. Batt has squeezed into Hayley’s rambo quarter horse sheet while Subi’s still wearing his saratoga summer sheets. With his weight gain, I don’t love how the Saratoga sheet fits anymore, but if I don’t have to buy another sheet, I’d rather not. If necessary, I’ll get him a Kensington, but hopefully the saratogas will hold up despite not fitting perfectly.

Anyway, just a brief update. Now if only I could figure out how to best keep Subi calm when I work Batt… this is driving me crazy (Subi is completely ok if I take him out to work even if he can’t see Batt. He doesn’t care at all. Batt leaves and fireworks begin)!!! 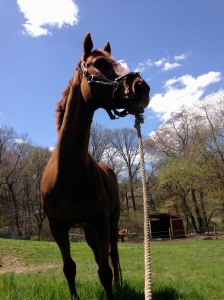