Lovely scar tissue hoof… this is what happens when you rip off 3/4 of your hoof as a 2 year old… It looks ugly but when he doesn’t have an abscess, he’s sound on it. Moreso than when we tried to make it look good. Lots and lots of scar tissue…

I also turned him out for a while the other day with his soak bag because I was lazy and had other stuff to do. Jiminy tried to eat the bag. Again, Mother. Of. The. Year.

Can you spot the teeth marks?

But, enough about Batt, on to Ranger!

Ranger was NOT HAPPY TO SEE ME AT ALL.

He lost his BFF Elliot. Elliot now goes out with Coffee, rodeo horse turned princess (trainer’s husband’s new rodeo horse who was NOT happy to be out in the storm last night because he’s a princess now). Ranger is out with Mikey and Forrest now. He’s just as obsessed with his BFFs so who cares? Anyway, his friends were outside, he had already had a lesson earlier in the day, and I was there to make him work again rather than just give him carrots? What the hell man?

So, we were poorly behaved in the cross ties. Normally poor cross tie behavior waits until post ride. Not today. Ugh. And it was looking ominous outside. Double ugh.

So we finally made it outside and watched the last course of the pony ahead of us. Then we proceeded to truck around the ring like crazy people at the trot. Thankfully after one circuit, Ranger came to his senses and decided to listen to me and returned to a normal trot. Meanwhile the sky became more ugly. We added in the circles and it’s finally clicked that if I add inside leg FIRST then we don’t fall in AT ALL when we circle. Anyway, our circles were lovely and balanced, regardless of size and impressed my trainer. Yay!

We walked and then, being warned that the storm was imminent, picked up the canter. I think we may have only cantered one direction… We cantered around, circled some, and then added in this “tiny pile of poles resembling a cross rail” and continued doing that landing right lead about 4 or 5 times before asking to land left. Which we actually did successfully. However, after landing left, I actually died and needed a break. So we walked. 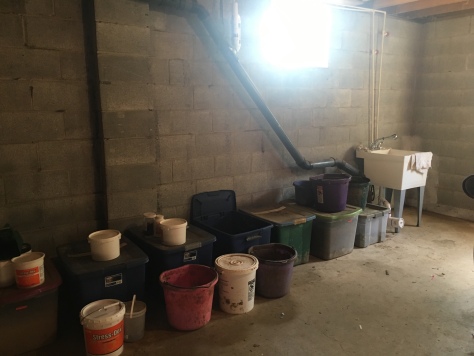 Highlight of my week? I finally have a utility sink. And a crazy complicated feed program…

We next cantered over the log jump around around to the outside line that I love. I could NOT for the life of me see the spot to the log. We added and I jumped ahead because ???

Next, we did our white oxer and were to do the inside broken line around to the outside line. Except I turned back to the log because I can’t follow directions. And I didn’t even jump the log well and chipped it.

So we started again. And talked about how when I have the longest stride possible, it’s hard to adjust. So instead, I collected my reins and his stride and actually rode and followed directions. And you know what? It was better! Shocking! We landed on all our leads and hit our spots and everything was nice. We were a little forward landing from the in of the broken line and I had to collect a bit after stride 2, rather than sitting for stride 1 and 2, but the line worked out well. I also needed to woah a bit for the outside line, but again, I adore the line and it worked out perfectly.

We took a minute to catch our breath (OMG humidity) and managed to get one last coarse in (thunder was rolling in). This time, we rode conservatively to prove we could. If we’re more forward, we can land the lead, but the conservative ride, nope. So we missed every. single. lead. Ha. But, he was a good boy and did everything I asked. We got in the barn and the skies opened up.

And the lightning started.

For 30 freaking minutes until I felt safe enough to turn him out. So much lightning. And rain. OMG.

Ranger had a melt down. While all the horses were melting outside because… rain. Ranger was melting down, because, OMG no friends inside with him and he needed to be OUTSIDE OMG NOW.

On my way out, I came across the most incredible rainbow.

Most amazing rainbow. And a random stranger’s house.

And then another storm. 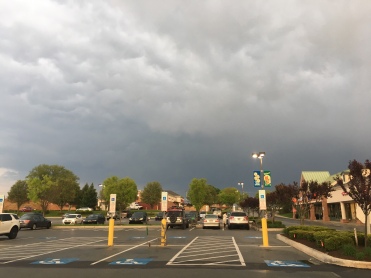 Following the drama of last week (I did, by the way, receive my final paycheck), I spent all week looking forward to a trail ride on Saturday with Michele.

Less a fabulous lesson on Ranger that almost didn’t happen due to a conference that had me out of town on my usual lesson day, the week basically sucked. I could talk about my lesson, which was FABULOUS, but I find when I have terrible weeks and my life sucks, for some reason, I feel the need to keep my lessons to myself. Let me just say that Ranger can cure anything and the lesson ended with the jumps getting hiked up for a final course. We cooled out with a walk around the fields and just for a moment, all was right in the world.

Good mood vanished pretty quickly when I headed over to the vet to pick up meds for Batts allergies/heaves to find that even though they said they’d leave it in the pick up box (that I couldn’t find), it wasn’t there. One bag of stuff was, just not mine. Ugh. Next morning I got up at 3:30 to head to a conference where my first presenter was LATE. And a whole lot of other drama. Finally on Friday, got back to vet, found out someone else had picked up my meds, got the meds… 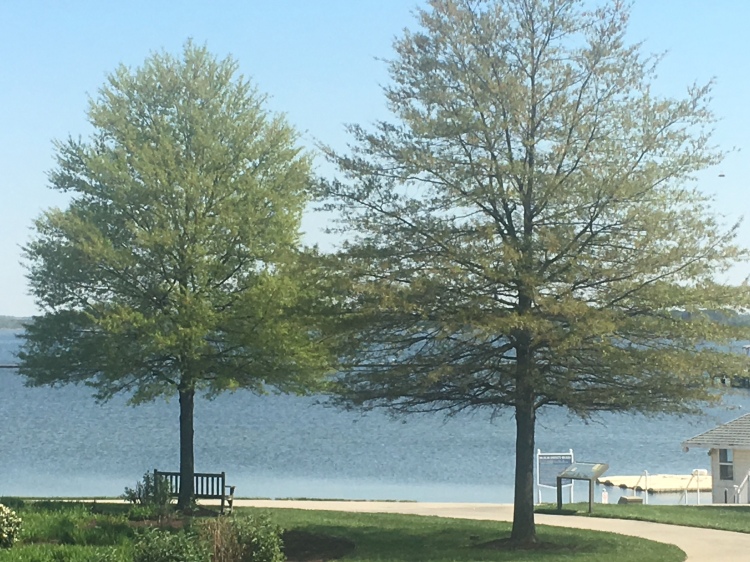 Which brings us to Saturday. Feed horses, all seems good, got out to open the gate and notice Batt is toe walking on his right hind. Shit. He’s not lame yet, but he’s not sound. Abscess. I text Michele in disgust cancelling our trail ride, toss a muzzle on Jiminy, throw the horses on grass, and basically sit in my backyard and cry. I had a why me pity party. It wasn’t pretty. 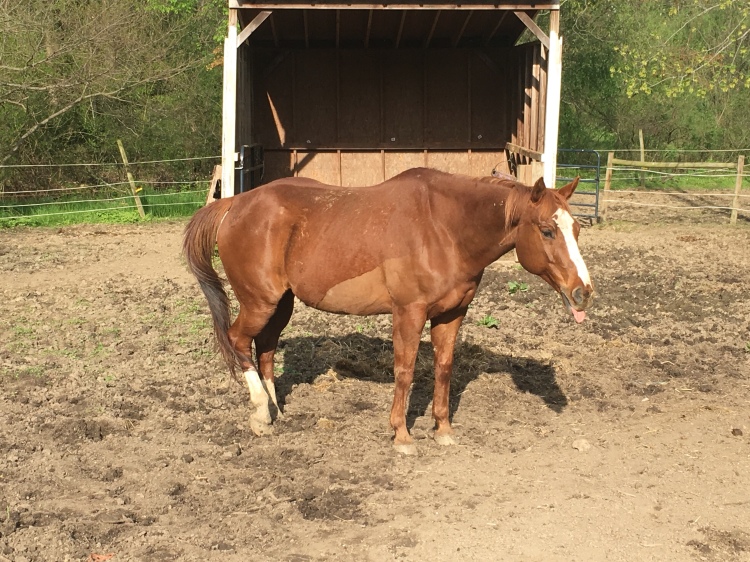 Toe walking and proud of getting out of work.

Then I got a text from the mom of the ONE STUDENT I didn’t contact about me no longer teaching (I only taught her 2x, barn owner taught her once or twice) as they have no loyalty to me. I ASSUMED that the idiots were contacting my students to tell them the change of instructors… But, I guess not? They were letting me know a neighbor was bringing her over, but… Nice. Professional. Anger resumed. I didn’t respond. Who knows if she was even having a lesson today? Not me.

Yesterday Batty was sad, gimpy, and in pain. My friend Sandra came out and we tackled his hoof which I failed the day before… He got the full treatment. During a 45 minute white lightning soak (FINALLY have IV bags to soak in), we removed about 40 pounds of hair, pulled his mane, brushed out his tail, and let him graze. After the soak, he got his hoof covered in iodine then an ichthammol wrap (in which he tried to murder me for holding his hoof up for too long). Hopefully he’ll be feeling better soon. Assuming I have the patience, I’ll do another soak tonight or tomorrow.

Meanwhile, the pollen is OUT OF CONTROL. And the coughing is out of control. Ugh.