After a few weeks of successful loading practice, I decided to load Batt up on Sunday and haul out for a day at Marsh Creek State Park in Downingtown, PA. He’s been loading so well lately that the biggest stressor was actually driving the trailer. But, rather than focus on that, I practiced some positive visualization (so not my strength!), sent Batt in the trailer and stuffed some carrots down his throat, and headed on my way.

Thankfully, the 45 (well, at my trailer driving speed was probably closer to an hour) minute drive was uneventful and we made it to Marsh Creek in one piece. He did move around some (which I tried to ignore), but spent most of the drive facing out the back of the trailer, watching all the traffic. The biggest challenge was probably unloading. For all of his stress about loading, he HATES getting off the trailer forward. His legs shake, he thinks, he hesitates, and finally, at my urging, holds his breath and leaps off… He’d be much happier if I turned him around and let him back out of the step up…. Strange horse.

Once he was off the trailer, it was as if he’d been there his entire life. Lots of exploring and grass eating, but mostly a super happy horse. We grazed for a bit, watched a lesson, explored the barn, and then went for a short ride in the ring. Batty was sound and happy and dead quiet which is even more impressive considering I haven’t ridden him since the blizzard (and not consistently since probably a month or 2 before that).

After our time in the ring (where he made a new friend and then proceeded to scream for his new friend for a minute once he left), I decided to take him for a quick walk down to the water, because, why not take a horse who is in a new place, who hasn’t really been ridden, down to the lake alone? Perfectly reasonable, right? If there were every any doubts that this horse is bombproof…

As expected, he was a star. I don’t think his ears ever went back once (well, he did sulk when we went back to the barn). He was just alert and happy and in explorer mode. That said, he would NOT step on the sand or get in the water. He was happy, but nope, not happening. And then some jogger came over with his dog to get a drink. Watching the dog drink while wading in the water? Yep, my idiot horse walked right in, had a drink, and splashed around.

After our lake journey, I threw him in the paddock for a bit and he made friends and flirted with mares. After a couple hours off, we tacked back up and headed out on a trail ride with some barn friends and customers. There were a few more people then I’d have liked (3 customers, 3 boarders, and me so 7 in all), but he did well. He did NOT like following and would have much preferred being the leader (not that he knew where he was going but obviously that wasn’t important), but stayed as close to the front as he could. We just walked (which was good) and the only really issue came when we had to cross a fallen tree. It was small enough that the horses could step over it, but larger enough that my reformed-ish stopper assumed something was living inside of it and would NOT walk over. Now, we had a horse up our butt and no real space to circle/trot over it/jump it like it was 4 feet tall so I ended up hopping off and the second I was on the other side, he walked/jumped over the scary thing with something living inside. I got back on and we continued on our way. I could have let everyone else cross and then have tried to get him over but this was just easier and faster. Sometimes it’s not the right place to school…

Anyway, the rest of the ride was uneventful and we ended with another splash in the lake. This time splashing as much as possible and contemplating a nice roll. We left before we could do more than consider. We sulked the remaining way back to the barn. 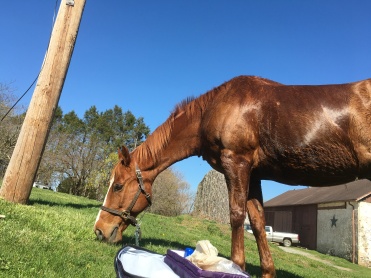 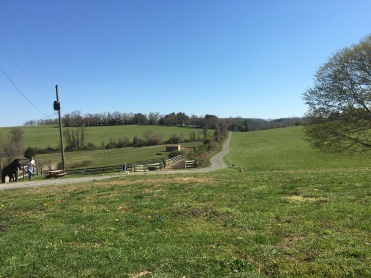 Eventually it was time to head home. He was a little reluctant to get back on the trailer (though we had already reloaded once before the trail ride just to confirm it was possible), but a little clucking and 2 minutes later he loaded himself and home we went (journey was a bit more exciting as we were surrounded at one point by 7 bikers… We survived and came home to a nice beet pulp/electrolyte mash and lots of water.

So happy the first trip is in the books. Hoping this will be a season of lots of fun and exploring!