Because when it’s 70 degrees, summer, and other than a haul out the day before, you haven’t been anywhere in 14 months, why NOT haul out for a trail ride at Fair Hill?

Any why not go solo?

What could go wrong?

Sunday I decided to take advantage of another day off and take Batty out to Fair Hill for our first solo trail ride…ever.

Honestly, I’ve never been big on the idea of solo trail rides, but if I don’t have people to ride with, why am I letting that stop me? So, solo trail ride it is…

And, it was a complete non-event.  I rode 1 handed, holding the buckle almost the entire time. I let Batt choose our route part of the time…

We made no friends despite the plethora of trailers, stuck with our own plan, and didn’t even get too lost. And honestly? It was a really nice way to spend the late morning/early afternoon.

his groaning is a little special…

We wandered through trails and saw the sights, tackled bridges (!!!!) including the bridge that tried to kill both him and Remus last June, wandered through the covered bridge, and “galloped” through fields until we eventually “found” our way back to the trailer (with a tiny bit of help from google maps). The only thing that would have made the day better? Hoof boots. Batt needs a trim and his renegades don’t currently fit so he was a bit sore on gravel but whatever.

The covered bridge series… [this bridge used to be scary, but it’s been a non issue lately. people like to fish next to it and “jump out” which is spooky… plus people are always taking pictures]

This bridge caused so many headaches in the past. Including last time with Michele. Once when I was out, I had to hop off and beat him over. Not really, but hopping off and use of a crop was involved. And this time? We just walked over. I went the long way to avoid it and then decided to see if he’d walk over once I was at a point that it didn’t matter. Go figure…

We ran into a few horses along the way, no one could believe it was his first solo ride.

He was a VERY good boy.

Onto our next great adventure! (stay tuned for less fun updates about a horse who isn’t eating and may have ulcers again…) 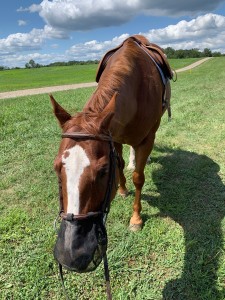 After my lesson that didn’t happen Thursday, I was determined to ride my horse this weekend, even if it killed me (or him). I was up for the challenge. That said, he’s had a grand total of 2 rides this year and hasn’t been off the property since (early) July of last year. What could go wrong? But my trailer has new tires, the truck has new tires, and I needed to use them, right? 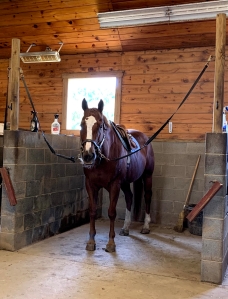 So bright and early Saturday morning, I hitched the trailer up (second time since last July–first time was getting those new tires) and loaded Batt up. He seemed… confused. He hopped right in and hopped right out. We reloaded and in the trailer he stayed. Lol. We made the 5 minute journey over to Ranger’s barn for a ride in the ring where we first were re-introduced to scary stuff like wash stalls and cross ties.

Other than the wash stall? Everything else was a complete non issue. Batt marched in the ring, we set up a cross rail (there was a perfect jump without boxes or fill so I set it up JUST IN CASE–because what else do you do with your out of shape horse?) and I hopped on.

And we rode. We maneuvered puddles (those took some work). Walked. Trotted. And looked at that stupid cross rail. On re-approach at the walk, he launched himself over it, because that’s what stupid chestnut geldings do. And he was so proud of himself about his 18″ cross rail… We trotted over it about 6 more times before managing to canter about 1.2 times around each direction and called it a day with ring work. Being out of shape is hard, man!

Then, because he’s awesome, he let me unlatch the gate and we went for a walk around the property before revisting the wash stall and heading home.

Nothing fancy, nothing exciting, but honestly? A complete non event for someone’s first trip off the property in almost 14 months and 3rd ride in a year. 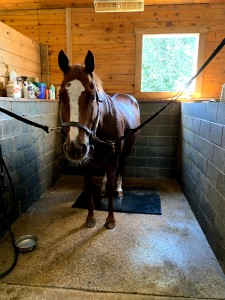 After not having ridden in 3 weeks, the drought ended Friday. And then the storms came. 4 rides in 3 days? Who am I?

My weekly lessons on Ranger started back up Friday night (thanks to horrific weather and flooding on Thursday) but I’ll save that recap for it’s own post. Still unpacking a lot from that lesson.

Saturday, however, introduced a different ride.

I’m a little confused. Why is a piece of copper in my mouth? Retired here! — Batt

After nearly a year off, Batt returned to work. My trailer still needs brakes and I’m still trying to figure out if he needs medication pre-ride but I’d rather experiment at home vs out on the trail or when hauling out. And to be honest? I’m still not sure. He coughed some, but not at the walk and really not at the canter. Mostly at the trot and mostly when he was winded or annoyed. Verdict still out.

Coughing above but then downhill 2 seconds later…

I’m assuming he’s resigned to his fate? Or trotting downhill as to the right…

However, cantering was a bit more exciting… a quick “attempt” to “buck” me off was the only fireworks in 2 days (videos are from Sunday’s ride, but he did the same thing on Saturday). Fat quarter horses can’t buck.

Much better. We need to work on straight but…

So out of shape! We did next to nothing Saturday…

Right now, I think he needs endurance more than anything. He’s still on steroids and I’m planning to try Respi Free and possible Air Power. But, he’s 100000% fat and out of shape… The heavy breathing I believe is more endurance than heaves.

We mostly walked with some trot laps and a few canter sets to make him happy. And took a cool down walk through the neighboring development to make him happy — he stared longingly at all the driveways he couldn’t explore and shuffled his feet. And in the end was soaked in sweat. Getting back in to shape is hard! 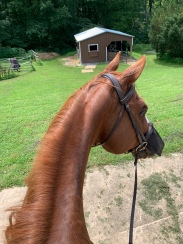