I haven’t hauled him out ANYWHERE in a while so we’ll have to see if he’s happy attitude continues when we go ride in a ring (or, if the attitude was due to the 2 abscess he had even though he was sound on his right front…). Either way, Grumpy Chestnut, aka Batts, is back to his old self. 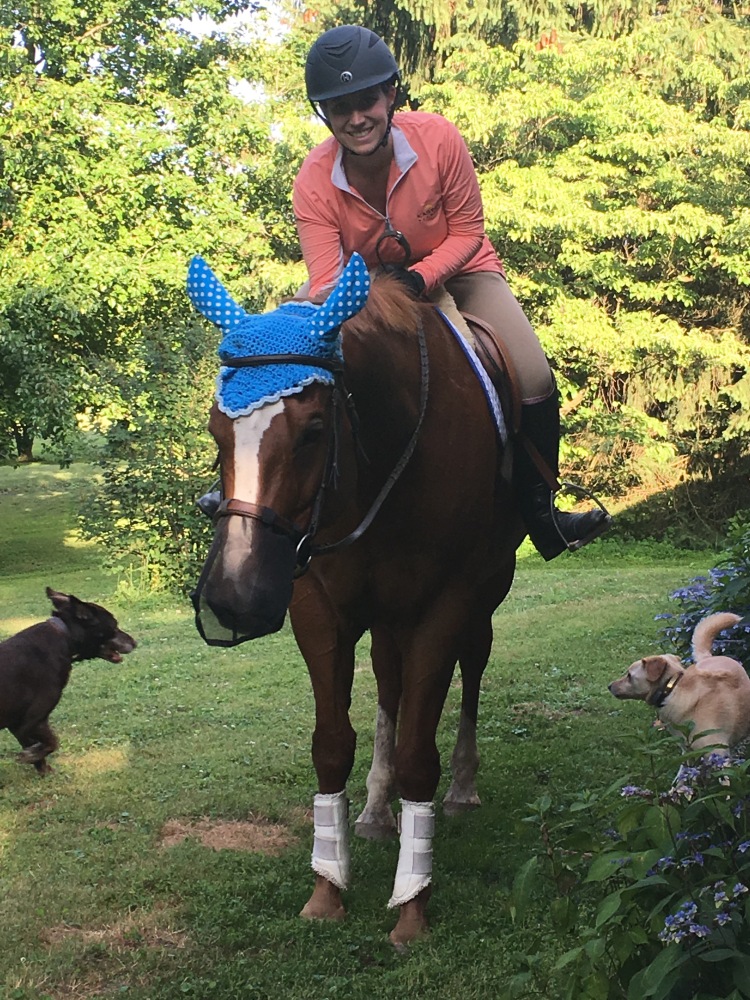 Just like last time, we kept  the ride relatively easy. A quick warm up on the lunge line (he’s just happier that way), some trotting and cantering hill work (SO GRUMPY when I won’t let him just canter up the damn hill), then off to jump all the things in the backyard. By all the things, I mean 3 crossrails and some ground poles (ground poles we did 1x because I stuck them too close to the trees and wacked my head against the branches…).

See, let me remind you, Batts is a stopper. We have jump issues. THIS is why I ride Ranger. When your trainer tells your no amount of training will likely fix the issue (and your horse was just miserable)… Yeah. So I like to make him look. Well, not happening today.

So I circled, tapped him with the crop (extra encouragement to hopefully remind him that yes, we would be JUMPING), and closed my eyes.  We’d do one of two things. Jump or slam on the breaks and realize he needed to inspect the jump. Today we launched ourselves over with complete confidence. We were NOT inspecting jumps. It was a Batts is right, I am wrong kind of night.

So, I decided to trust him and trotted the other two crossrails (sans inspection) where we also launched over with enthusiasm… Go figure. Sometimes this horse is confident? It’s kind of scary. But, he is crossrail champion of the world.

He wanted NOTHING more than to canter the broken line between two of our crossrails. The first time I WOULD NOT let him. Pissed him off so much. Second time I gave in and we did it, but you can see the slight hesitation at the base. Lovely that now I was going to have to ride… Damn you horse. Make me work? Later?

The first several jumps, my Hermione dog was having fun running up the hill along side of us (several feet to our right). Batts is NOT a dog horse (that’s Subi). But you can tell he was having fun when that wasn’t even annoying him. He learned long ago not to mess with them (and they know when to get away from him), but it’s amazing when he’s having fun. Meanwhile, my cat started watching our antics from the window, with great confusion…

He didn’t quite love the other fence as much after the first time through (boredom) and I was too lazy to put them up to a larger crossrail, but he still had fun “galloping” up his hill. He’s such a weirdo.

And I did make myself go back and redo our bending line, adding leg, and thankfully it was a success. It’s still hard to trust a horse who has such a stopping history, but he loves his crossrails and seems to ADORE jumping uphill on grass. Go figure? I’m telling you, if Batts could go jump a cross country course of all crossrails and MAYBE a water element (we’d have to school water a bit, but eventually we’d be OK with it), he’s LOVE IT.  Seriously. I’m not sure how he’d do with banks, but again, it’s solid jumps that freak him out, so he might actually be OK with those. Weirdo. 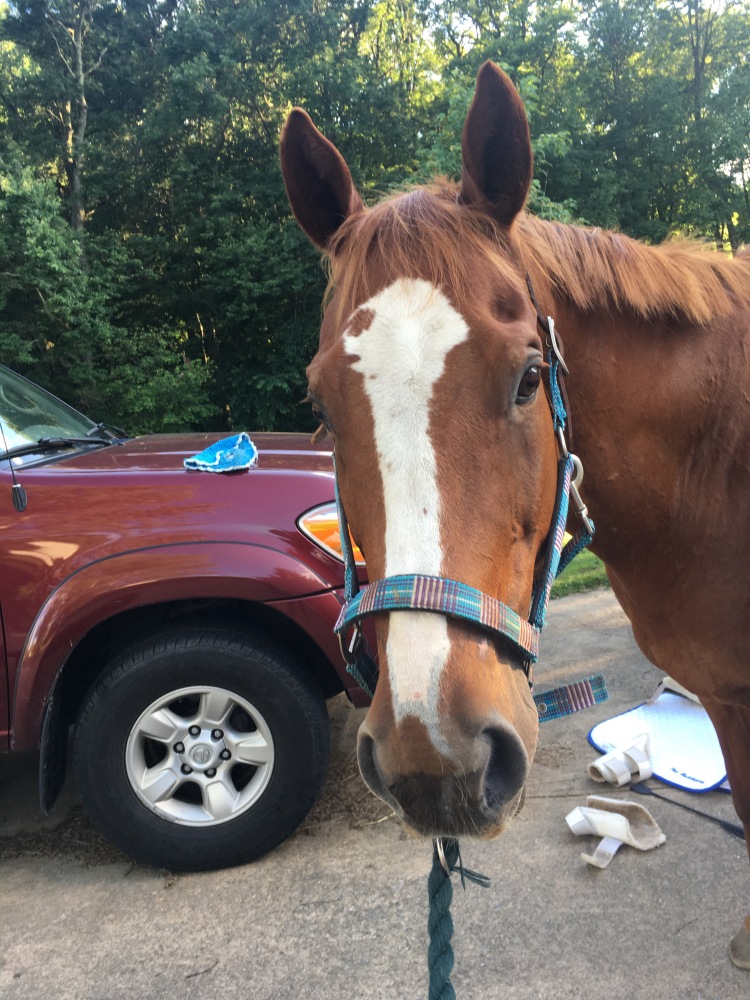 “I jumped all the things!” So proud of himself!