So, for a while now, I’ve planned to start making some fly bonnets, or head doilies as my husband calls them, and I did start making one last year? But to be honest, lack of motivation sort of stopped the quick project in it’s tracks.

Anyway, last week I finished up one I started a year ago and started/finished a second one this week. The first one has crocheted ears and I just don’t like them (too bulky and weird) so  I’ve got to get back to that one and redo it. For the second, I went with fabric ears. While the fabric is a pain when you don’t have a sewing machine, they’re not horrible.

Anyway, my first fabric ear attempt sort of failed (see picture on left). Despite following a random pattern for ears I found somewhere, they were just too small. They fit on Batty, but were just too tight. I couldn’t even get them on Subi’s head. Who knew his ears were bigger than Batts’? Moral of the story, before attaching ears, make sure said ears fit horse… Much better than trying on a fly bonnet with too small ears in the dark at 10:30 at night. Not that I did any such thing… Yes, my horses are saints.

Ear attempt # 2 was more successful (see picture on right) though I’m still not completely happy with how I attached them (but happy enough not to pull them back off). I did not follow my own advice and try them on before attaching, but I was lucky and they fit (AND I have the pattern for next time (could make them more narrow at  the top too if I want).

“I am not amused. I have polka-dot antlers.”

I’m happy to report they stayed on the entire ride despite a less than impressed horse (though he was more less than impressed by the spurs I was wearing, the heat, and my insistence that he get in front of my leg and move forward). It was hot and humid and buggy, but he didn’t have bugs in his ears.

Anyway, I’m pretty happy with how this one came out. Working on a second one that hopefully I’ll finish this week. Then I have lots more fun yarn and fabrics to mess around with. Poor horses, but at least I’m happy? 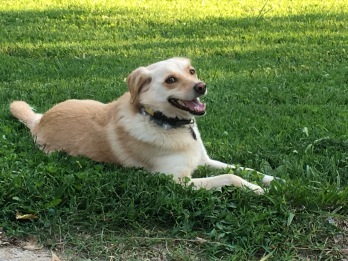 Anyway, thunderstorms expected this evening and of course I have a lesson. I seem to luck out with lessons and thunderstorms… 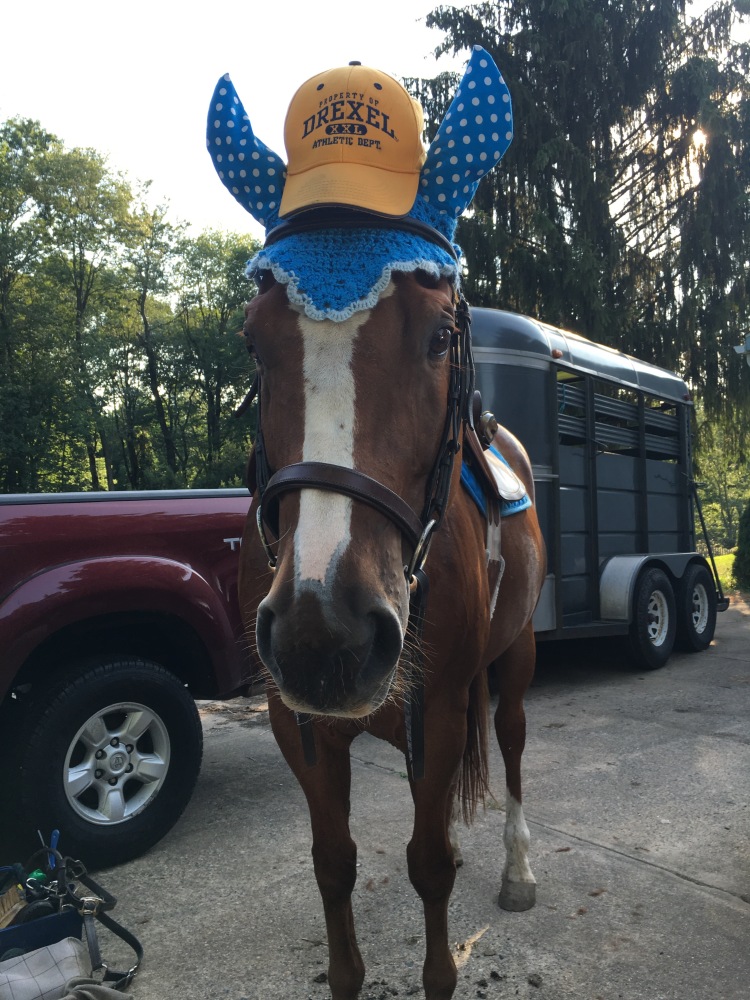