Since I’m still in denial that it’s 2017 and I’m back at work (which is quite a challenge considering I’m back at work), I actually rode the Batthorse for the first time since the (day after) thanksgiving paper chase the Friday before New Years. Between work, weather, and the whole colic thing, Batty once again thought he was retired. So, Friday morning when I walked him over to the trailer, he was a little, well, surprised.

We headed over to my friend’s barn at Marsh Creek since I was feeling cheap and didn’t feel like paying anyone ring fees. Somehow that justified a 50 minute trailer ride to ride outside vs a 5 minute drive an $15 ring fee to use an indoor. But, I have actually hauled Batts over to the place I take lessons since I started riding Ranger and I don’t know… I know they were at a show, but I didn’t want to be in anyone’s way. I’m sure at some point I’ll bring Batt again, but for now, we took the cheap(ish) way out.

“TREATS!” We eat for a living now…

The ground was a little iffy in the beginning, but thankfully other thank a couple of icy patches, the rest of the footing was nice. Despite having had a month off, Batts was dead quite, meaning, at some point I was going to pay in his own unique way. Soundness wise he was OK, but not quite 100% but that’s also what I get for him having had a month+ off. It didn’t stop him from running around like a lunatic the day before either (PSA starts: his back hoof is also currently crap thanks to tearing apart as a 2 year old. As a result, he has a lot of scar tissue and regular cracks that result plus a couple growing out abscesses, one of which grew out at the crack and broke off, this happens at least 1x a year. He’s sound on it, but it accounts for the slight unevenness and will be fixed at next trim. Anyway, vet and farrier agree that it doesn’t affect him to warrant time off and he’s fine to work through all of this. I’ve known him ~12 years, owned him 6, this is regularly the case. In addition, time off = weight gain = loss of fitness. He’s always more comfortable was he’s lighter… He’s currently wearing  his 52″ girth on the 2nd hole on each side rather than the 3rd and 4th hole… PSA  over). 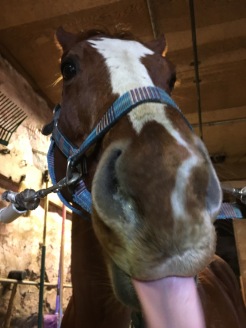 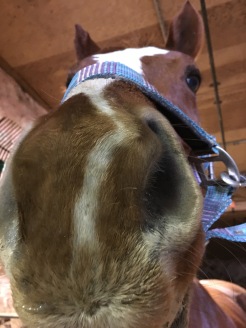 So we trotted, we canter, we were super quiet and dead. Stiff to the right (damn all the flat work we did this summer and then lost my not doing any real work since Ludwig’s Corner Labor Day weekend…), loosened up some. One of the lesson kids trotted him around a little and he was a good boy for her. Then I got on and all hell broke loose…

See, Batty doesn’t get up like normal horses. He doesn’t really buck. He doesn’t exactly take off. He doesn’t do anything. But, he get ideas in his head and basically stops listening. Rider becomes a passenger and he tries to take control. Some times successfully, sometimes not. He decided we were going to jump. Cross rails, but jump nonetheless. Before I had any idea what was going on, we were heading towards a cross rail at a power walk. So, then I was able to take control and trot it a few times before he got bored. We did a few others before attempting a little course.

That’s when the antics started. Our first attempt, we landed the white single and promptly jumped (all 4 feet off the ground), followed by a full body shake, tried to take off at a “gallop” and then continued on, pissed off that I made him trot into his last line and canter out, adding as many strides possible in between because he was pissed off, then landed and “bolted” down the long side once, extra proud of himself. Unfortunately, I didn’t get that course on video.

We did the course again without any enthusiasm, this time, pissed off about the last course, we trotted the line. Then repeated our line just to prove we could trot in, canter out, regardless of the number of stride we included…

Overall, it wasn’t a bad way to spend the day. And,  despite not driving the trailer all the often as of late, I successfully backed into (!) and down the driveway without assistance! Usually I need my husband to meet me at the top and guide me in and stop traffic. Considering this time last year I wasn’t even driving the trailer (and Batty wasn’t even getting in the damn thing), we’ve come a long way. My driveway sucks… I need to post a picture of it but think long, narrow, and the need to back in and down… I use the street that’s not quite perpendicular to assist but it’s really not fun to turn into my driveway.

(side note: show cancelled for this weekend due to cold temps. Rescheduled for next weekend though haven’t talked to trainer to see if we’re still going)