Don’t tell my boys, but Ranger is the best of the best.

It’s been a rough week work wise, but I dragged myself out to my lesson last night — a lesson that almost didn’t happen as my husband stopped me as I was pulling out of the driveway to ask if I could push my lesson back 15-30 minutes. As the last lesson of the night, no. I either go or cancel (thanks Jiminy for destroying the fence. Michele, you just MIGHT find him tied to your front door).

Thanks to the INSANE weather and the fact that I was running late, I pulled in, and discovered 2 things. 1. there were NO lights on in the indoor meaning we were RIDING OUTSIDE IN FEBRUARY thanks for the 58 degree temperature and 2. Ranger was a mudpit thanks to being turned out blanket/sheetless. Did I mention I was running late? So late in fact the previous lesson came back in before I finished tacking up and my trainer called to see if I was in the barn… Ooops. But, she said I wasn’t actually late…

After a brief foray into discussions about the state of the world (we tend to have these conversations whether or not we should is a different discussion, but I’m a willing participant so…), I started trotting. It was SO COMPLETELY AMAZING TO BE RIDING OUTSIDE I CAN’T EVEN DESCRIBE IT. There were wet spots, but the ring actually has amazing drainage. Ranger wasn’t as thrilled with the kids playing first on the swingset and then basketball, but we later had bigger issues with the cat jumping out at us… I’ll get to that. Nonetheless, he’s Ranger so whatever. We started with a bunch of trotting and circles and all that. With the extra space, it was so much easier to get him off his left shoulder and nothing felt as tight. I love having a FENCE and not walls!!!

There were 2 polls in the ring. 1 in the middle of the ring and 1 down by the in-gate. They are the blue lines in the terribly drawn course map below. After doing tight circles around random jumps to make sure Ranger was actually listen and off his shoulder (damn him and his leaning), we added in those polls, just working on steering straight and getting him to move his body over. And then the cat launched over the pole so we had to avoid him too. Finally, after adding in some halts and backs (damn horse hears trainer say halt and halts… So much for listening to me last night…) we got to canter.

Cantering is HARD you know? Holy crap. I really need to work on my trot-canter transitions as my walk-canter transitions are better. Right lead was actually OK. We cantered for a bit (serious, HOLY CRAP the amount of canter) and then circled, and then cantered over the damn pole in the middle of the ring. And that is when the stupid cat zig-zagged into the ring in front of us and I got distracted and we didn’t quite hold our canter because CAT. So canter picked up and do it again. And again. CAT zigged in front of us AGAIN and jumped the pole and we chipped the pole. I think the cat then jumped a jump and finally left the ring. AND WE WERE FREE! Then, on take 25, because we were still cantering (ok, it was only the 4th circle), we continued our canter and cantered onto the log jump which is the black line at the bottom of the horrific image below. So, circle the to the pole, canter pole, hold canter to log, keep canter because even though the log jump was perfect, the pole WASN’T and we must repeat. After 3 times, the pole was finally adequate and we got to trot… in order to change direction.

Really bad course map. Top is by the gate, bottom is far end of the ring by the road. We did NOT jump the triple. Blue are poles.

And pick up and left lead canter. And then, canter the damn pole. The damn pole was SO MUCH HARDER this way to get a lovely stride to it. With enough leg, I help the canter, but it was a chip. I had too much canter and needed to shorted, but, it was SO MUCH STRUGGLE to pick up the canter from the trot and it took me FOREVER to get the canter. So, once we did, I hesitated to woah at all… And, it turned out, I was to know that from the pole, I was to go to the log so the first time I missed that step. Oops. So repeat. Pole to log. Second time was an improvement though we needed a simple change because, Ranger. Third time was lovelier and finally, WALK!!

(somewhere during this left lead work, it started pouring which sent the kids inside and left me wet, but the rain did end even if I almost dropped my reins once and buffled up the canter…)

After a VERY BRIEF walk, we started with the outside line, trotting in, cantering out in 5. So weird to trot in (though I did some of this when I rode a very angry Ranger Sunday in the indoor and he went from dead to insane when I made him work after his new friend left the indoor and it was pouring and he was ANGRY RANGER). He was lovely. We did this once or twice? Easy and slow. Right lead for those trying to follow along on my ugly graphic (and not the triple).

Then we cantered in left lead to the damn inside line (the pole was gone) — the only really inside line — attempting a going 6. The trick with this line is that we need to stay out close to the gate (which would be up at the top of the picture) before turning to first jump. We had the turn, but not quite the energy the first time. So we had 2 jumps were I stayed back and let Ranger save my butt (but better then jumping ahead). So, needless to say, we repeated. Second time was better, but it still wasn’t fabulous. My turn is actually great, but I just can’t nail the first jump. But, I stayed with the plan this time, landed moved him up, and got the 6 as planned. Because the line went better, we moved on to a course (because I wasn’t already dead at that point). We started (right lead) cantering down the inside single, turning after the first jump of the outside line). The jump was beyond PERFECT and I was able to keep Ranger up off of his front end (he tried to get heavy, but came up right away with just a little ask from me). We landed, did a super quick simple change and kept the pace which was lovely. This was the missing link for the inside line. We rode the same path to the inside line (but I’m convince I cut the corner a tiny bit which made it easier–I tend to stay out too much even though this line you need to so maybe it was just more pace?) and nailed the first jump. Then we just balanced for the second jump, not needing to override like the time before. Because he was super balanced, we landed right and held our canter to continue to our outside line, cantering in to the 4. He tried to get heavy, though not strong. The first jump was met perfectly, I was able to woah just enough, and the 4 was there and light and no freight training occurred (it would have, but he was listening so well). It was one of the courses where the first words out of my mouth were “Don’t make me do that again!” — He was SO PERFECT!

We ended cantering up to the big oxer in the inside/middle of the ring. He was good, I was a bit tentative. He took care of me. I should have been a bit more aggressive. The jump was fine. Just not my best. Oh well. We didn’t do it again, which was fine. I was tired, but part of me wishes I’d ridden it better. The spot was better, but I was more passive than I could have been. But, the spot was nice. I just wasn’t 100% confident.

Overall though, best lesson in a long time. I LOVE being outside and needed that so much. Ranger is the best. 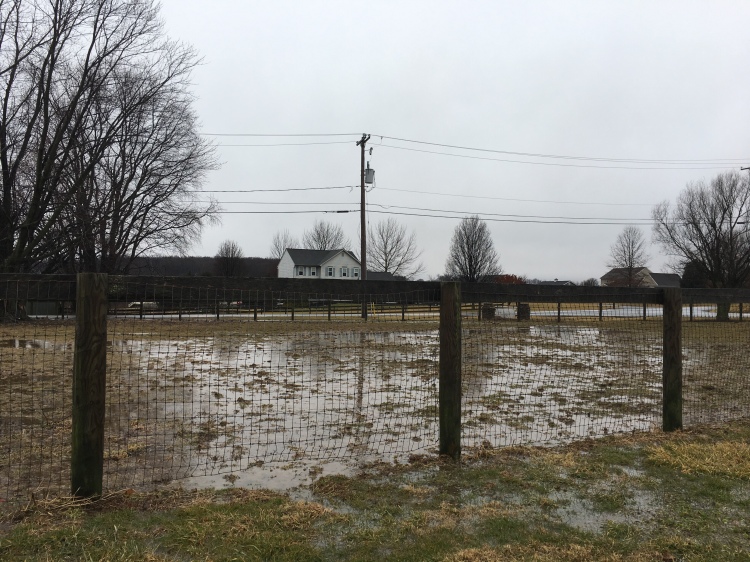