It’s been insanely stressful at work lately (understatement of the year, but this blog isn’t about me melting down about work), so a lesson with Ranger was exactly what I needed. 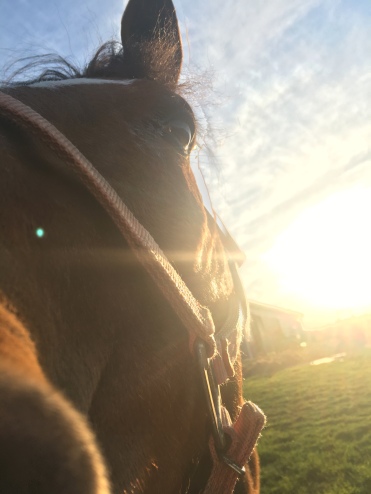 He was already ridden that day (and, as a result, was super clean) and supposedly spent a lot of time leaning in. But, he was super pleasant to ride. While slow and a bit pokey, I faced none of the typical leaning issues and we circled without issue and played none of our regular “GET OFF MY RIGHT LEG” game while trotting around or circling. Maybe he sensed my stress and was going easy on me? Maybe he was happy to have me on his back? Maybe he got it all out of his system earlier? Who knows, but all I know is “he would not stop leaning in the entire lesson” according to my trainer with his earlier rider. I faced none of that. Lucky me? Anyway, he was a DREAM to ride. Love my Ranger. 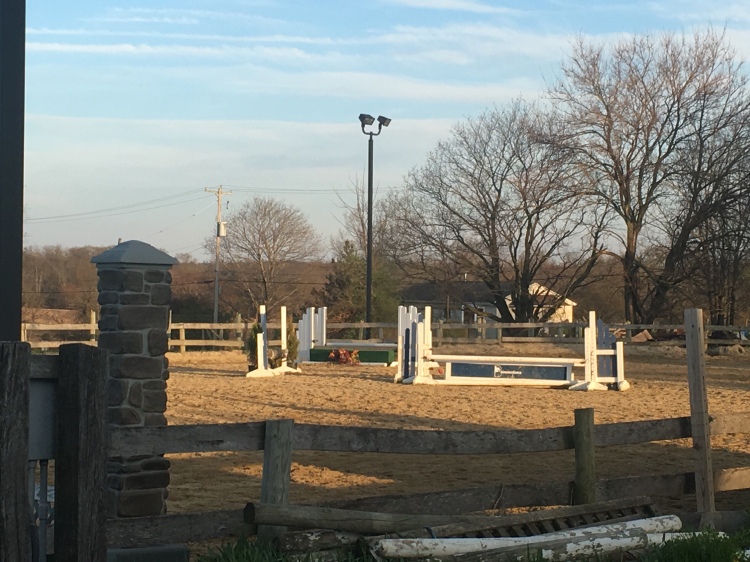 After a low key trot and canter warm up and a quick review of changes (we did one right to left and moved on), we started by picking up a right lead canter and started over the log jump heading away from the road (new course, yay!). Then, we continued to our outside line against the fence in a 7. Supposedly because the log jump is narrowish (ok, it didn’t feel that way, but I guess), Ranger likes to duck out), but there was NO hesitation, ducking, anything and we cantered over nicely and continued around (with a simple change because we. could. not. land. on. the. correct. lead. to. save. our. lives. at. all. during. the. entire. lesson. I think Ranger thought it was funny?) to the outside line in a 7. Every once in a while there is a line that I love. It’s this outside line. I cannot explain how much I just love this line. It is set up to perfection. Everything about it is perfection.

My lovely outside line

There wasn’t much to perfect (seriously. LOVE that line) so instead of turning to the outside line, we turned instead to our small white oxer after the log jump and then continued around to the broken line with the trees. The log was good, the oxer was eh (Ranger was a little slow so I ended up moving past the spot) and then the line, the first jump was again perfect, but then I again and too slow of a horse and rode too much to get too much pace and yep, move too far beyond the spot to a chip. Not that it mattered because it’s Ranger. But…

So we did that again. This time the wasn’t as good, I had a better but still not 100% perfect ride to the oxer and finally stopped over riding when it came to the broken line. Took me long enough, right? Then we continued around and added in the outside line and once again it was just perfection because it is. I 100% LOVE THAT LINE. It’s just so easy.

Instead of jumping the log away from the road again, we changed things up and took it towards the road. This direction I actually felt him think SLIGHTLY about doing something, but it wasn’t even any effort to keep him straight and he didn’t really try. It was a half hearted, “are you paying attention? yes? never mind.” Type of thing. We continued around down to our blue and white gate jump as a single towards the in gate and then came up to other outside line (I can’t remember the stride). This was the only time all night (the line) that Ranger had ANY energy and I had to actually land, woah SLIGHTLY and the just sit there. He was so completely perfect all lesson it was incredible. Have I mention how insanely perfect this horse is?

We ended on that course, because, I really couldn’t top anything. The jumps were low and easy, but who cares? The strides were fine even if I couldn’t see spots all the time (my eye wasn’t working which I hate as that is not normal for me). 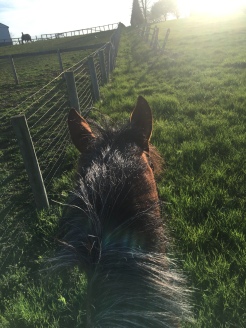 All in all though, it was a great lesson and just super..consistent. We took an insanely long walk around the paddocks to cool out which I needed just to decompress mentally.

Ranger grumbled as his friends were out eating his hay, but he enjoyed himself. It’s so nice it’s finally light and getting warm. I missed my post lesson walks. I really needed them. 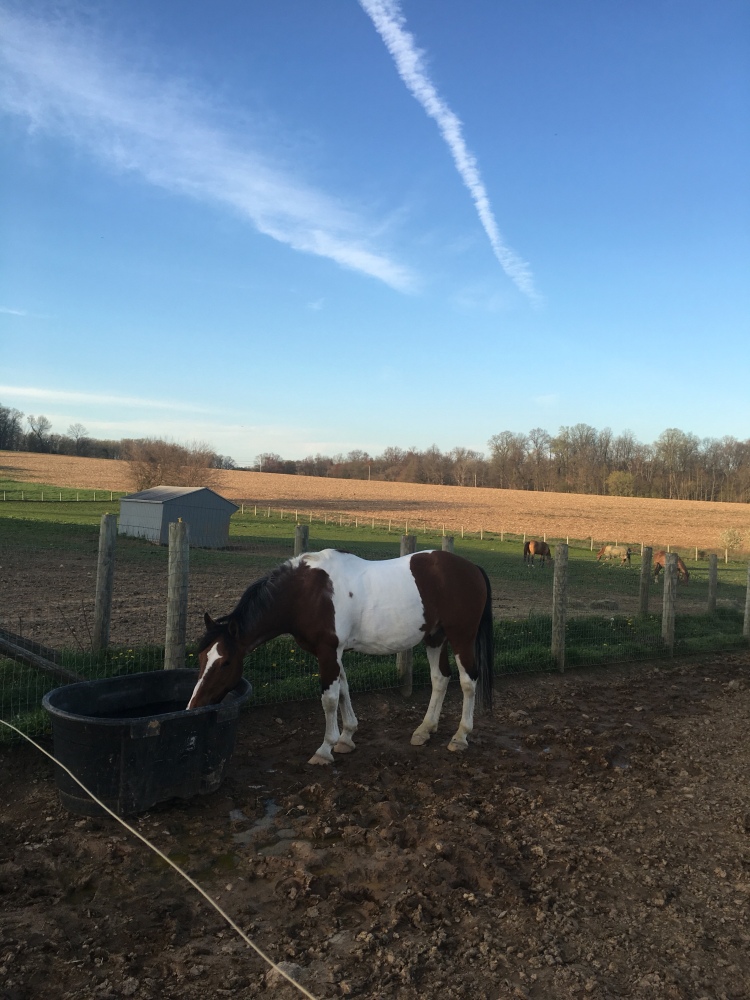 How could you not love this guy?