I have had some really decent lessons lately and yet, I haven’t felt like writing about them. But maybe I’ll touch on a few exercises?

We warmed up alternating between small and large canter circles. The size wasn’t exactly important so can’t necessarily say it was a perfect 10 meter circle (aim small was the goal). But think small balanced circle. The focus was adjusting stride length, getting Ranger off his inside shoulder and shifting his balance. Overall, he was very much listening to my aids and I began to fear something was wrong. Lol. Usually we struggle with the tiny circles but the seemed to work. The “larger” 20ish meter circles we a little uglier.

We continued this to a some larger circles over a pole which was fine one direction and challenging the other. After all the small circles, I struggled to make wider, more sweeping turns. But I got there in the end.

This should give you an idea of jump placement…

Next, the circle pattern continued to basically include the inside single. So, we were cantering a roll back to the oxer. Here is where I started struggling. Not with the fence. The fence was fine, but with the rhythm and the canter. First I was too fast for the exercise. Then my stride felt too choppy. The jump itself, fine. But the canter? It never felt right until the last jump. Finally, we had a discussion.

When do I start looking AT the jump?

The last few weeks, I’ve been told I’m looking too far ahead. Mostly on the flat, but I know that it’s impacting fences too.

See, I turn a corner and I see my distance (or where I should be leaving). It doesn’t matter if I’m 3 strides, 4 strides, or 7 strides. The problem is, I shouldn’t be looking for my distance at that point (unless I’m 3 or 4 strides away). I should just be focused on rhythm. I’m not a pro. And most pros aren’t focused on distances at that point…

So, next lesson. STOP LOOKING AT THE JUMP UNTIL YOU’RE 3 STRIDES AWAY. 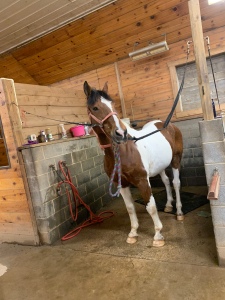 But cutest pony ever

We changed direction and the roll back the other way to the second jump in the inside line. When I turned, I was about 3-4 strides so I was able to look pretty much right away so it was fine. Rhythm felt better this way and all was good.

We ended up with the following course:

Outside single towards the road, inside single, inside line, outside line.

The plan was to not look ahead (haha). Basically, approaching the first single, I didn’t actually pay attention to that plan because, well, I didn’t have THAT long of a ride to it, but coming to the inside single, I did look the first time, and then immediately stared at the ground until my trainer told me I could look and then continued to see the same distance as I saw 7 or 8 strides before when I had initially looked at the fence… The rest of the course was fine.

We re-did this about 4-5 times only having one error (I focused SO MUCH on what my trainer was saying one time that I forgot to steer to the outside line and Ranger noped out of it… 100% on me…). The looking down before fences will stop, but it’s an attempt to retrain my brain not to find distances 8 strides away and instead just focus on my canter. Eventually I will be able to look at the jump, but right now glancing down is the easiest.

Do any of you look for your distances too early? Any tricks to STOP DOING IT?