It was a rough week. Less for Nay, but mostly for me. But this blog isn’t about that.

I grabbed three saddles from MD Saddlery to try on Nay and 2 were complete failures. He’s turning out to be a really strange fit. He doesn’t look wide so I had a m/n collegiate–way too narrow, an adjustable Bates w/ medium gullet–popped up in the back, and a wide Ashland Saut D’Or. The Ashland could be a hint wide, but not enough for a thick half pad, just a bulky saddle pad…. first saddle that hasn’t slid back on him (the case with every single one so far). My Toulouse popped up really bad with him (worse than the bates so we didn’t ride in that) and the integrity slid back, a lot… 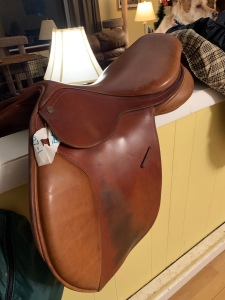 Bates — I didn’t love it in the store, but it felt super secure on Nay. Just didn’t fit.

Ashland— Love. And Lasagna. Needs conditioner. But so secure. Thigh blocks too.

Collegiate— I really liked this in store and sad I didn’t get to sit in it. Too narrow.

Saturday snow was expected so I tossed the saddles on in the morning and posted photos. My trainer saw, told me to come for a lesson as her show was cancelled and the snow…skipped us. So 30 minutes later we were over for a last minute lesson. She loved the fit of the Ashland too for both of us and even though she discouraged me from saddle shopping at this point, encouraged me to make an offer, especially if I can get them down in price (it’s cheap, but cheaper would be better). 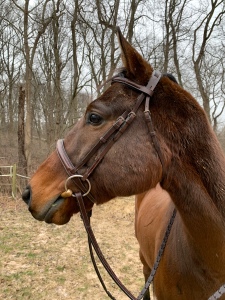 We started off trying to install a forward button. Nay was feeling quiet and with the ground in turnout hard, a touch footsore. I’m resisting shoes if I can (he’s been barefoot for years) and might try durasole to help toughen his soles as he deals with frozen mud. He’ll get there it just takes time. He got better once he realized the indoor was soft though. We worked over a pile of poles which he loved and made things better. 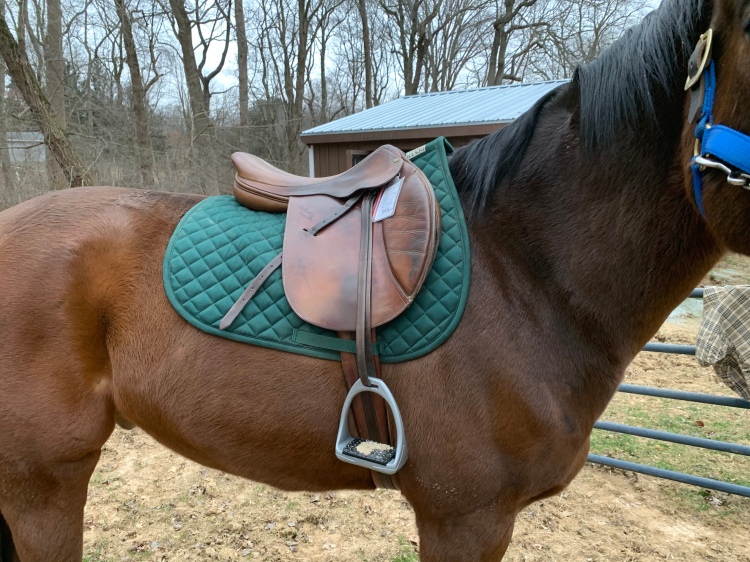 A better picture of the saddle

Then came the canter. So much easier to stay back in this saddle. OMG. Left lead was decent, but still had to work to keep the canter around corners, lots of losing it, regaining it, etc. Then the real challenge, cantering a half circle… it took a few time but we sort of, kind of, maybe got it? But, during all of this, I was told to..

It turns out, I don’t really know how to kick.

Another picture of his new fancy bridle. Xmas gift from my mom that had to be reordered by it was mismarked on tag and Nay has a weird cob head. Still needs more conditioner…

I mean, I can kick. Especially at the walk. Sort of at the trot, but at the canter? It’s hard! So we practiced because right now Nay doesn’t understand squeezing. First kick at the walk? No response… second? Mild ear flick. 🤦🏻‍♀️ Third with a cluck? Some forward momentum 😂 Folks. This is what I’m dealing with… with that, we attempted a right lead canter where I tried to kick approaching every corner. He’s so weak to the right, but he’s still trying to figure out what I want. Grabbing mane helped. But it was ugly and hilarious.

After my trainer commented that she’s pretty sure he’s going to be a quiet one, she had me walk back and forth over some jumps, letting him look at the boxes/flowers if he wants, but no turning around. He neither stopped or looked, just walked… eventually he got bored and clobbered one but didn’t change anything 🤣

We trotted them each direction for a total of 4 fences. Our last 2 can be seen here:

He’s unconcerned… obviously. Did I mention it was 22 degrees? Lol

I rode again yesterday (Sunday) and it was warmer, but windy and temperatures were dropping. Nay was less relaxed, but honestly, it didn’t matter. For the first time, I tacked up in the cross ties in the barn. He got in a fight with Splinty (stalled next to the one set) — I forget how bad he is as the one horse he doesn’t mess with is Bob– so we moved to the other set as Nay was a touch…traumatized. But he likes the barn and feels at home there. Once tacked up, we joined a pony inside and walked around a touch before I hopped on. We walked a trotted but got upset when his pony friend left (ie: screamed before walking and getting back to work). Whereas Saturday he was slow, Sunday he was more forward. Not fast just carrying himself forward. We did a lot of circles, figure eights (he actually liked those), serpentines, and our pole pile. He remained a touch unfocused, but didn’t put a hoof out of place.

Then we cantered. We had our best left lead canter ever. The benefit of a more forward horse? I left out the circles that probably were my homework and just focused on maintaining the canter which we held at an even pace for 2-3 times around the ring. Such a good boy! Right lead? We worked on kicking approaching our turns and cantered turns before losing it down the side. Progress? We would get it again.

After cantering, Nay more or less lost his brain and started screaming to every horse everywhere. He did nothing else, just screamed. He’s a screamer. So annoying. I ended up calling it a day after walking as he was annoying me. But, we stayed at the barn for another 30-45 minutes to work on patience. Not much of a punishment (not that that was the goal), but he had a ball. Best part of his day. He socialized with everyone (all 4 people) in the barn, got doted on, treats, attention, ignored, watched the activity. He loved it all. Plus, he just stood in the cross ties and pretty much only was scolded when he listed his leg to paw (he doesn’t paw, he just picks his leg up and holds it high in the airing his best Radio City Rockettes impression.

All in all? 2 great days with Nayners!

And then I went to return 2 of the saddles and bought a pair of Renegade Vipers (no idea the size) for $35… I figure I can sell them if they don’t fit, but my Renegades were $200 for the pair… deal of the day! Now I need to figure out the size. I’m pretty sure they are too small, but…