2 pigs in their natural habitat

I am currently raising a mini, a picky thoroughbred, and a pig. An OTTP. An Off-track thoroughpig.

See, last Sunday we moved the hay feeder because no one seemed to like its placement. We purchased the feeder after Batt died but they weren’t using it all that much after we got a whole bunch of rain. Instead, they were eating out of the nets I stuff regularly.

But the feeder was freaking expensive. And while I like the nets, I hate that I’m basically slowing Subi’s access to hay (though he LOVES the nets outside). I can’t do large hole nets because Nay Nay is stupid at once stuck his leg in one and got stuck… So, small hole nets ONLY.

There’s NOT actually very much hay on the ground despite what it looks like.

So, the feeder. We moved it. It’s 200+ lbs. But between my father-in-law, husband, and me, we got it moved. And stuck a bale of hay in it. And the idiot ponies? Ate the damn bale once the discovered.

Since then, they’ve eaten an entire bale in less than 8 hours a day. Some of these bales are 45lbs. And they are finishing them in about 8 hours. 2 horses and a mini. I was fine with this. Until I came out at 11am on Saturday and found the feeder empty… AFTER 2.5 hours of turnout. 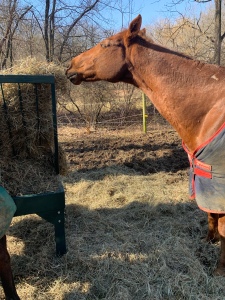 On further investigation, it turns out they just made a mess and some of the bale was on the ground, but seriously idiots? 2 hours? 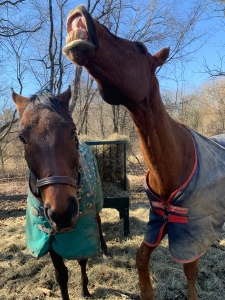 Subi also now plays with sticks… He takes them and swings them all around.

So I need help. HOW can I slow them down? I don’t mind them eating a bale a day. I need Subi to put on weight, but I want the hay to last a full 8-12 hours. If I net with slow hole nets, they’ll eat MAYBE 20lbs. So, there is that. Is there a good large hole net/netting that might work with the feeder? Subi won’t eat hay off the ground because… Subi…. Jiminy can wear a muzzle, but then nets become hard.

But they are the cutest pair of fools…pigs? 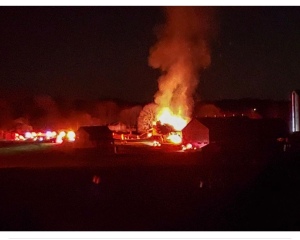 um… CRAZY fire. House with no electricity or occupants…

Meanwhile, my Amish neighbor’s old house burned down Friday night. They already built a new house on the farm and moved in. The windows of the old house were removed and brush was placed around the old house.

It is POSSIBLE that they chose to torch the old house, but this is ONLY speculation.  My asthma has been bothering me the last week and since Friday, my lungs have been on fire too. But, back to the fire. We saw something on Facebook around 7:30 and realized it was the Amish farm basically right behind us (one house between us) and walked out to see the fire. Way too close for comfort…

From my basement door

But moral of the story? PLEASE STOP BURNING STUFF! Whether houses or brush or burn piles. Burning stuff sucks when you have asthma! My other neighbors also were burning stuff Saturday and when I came back with Nay… I was a mess.

I’m still a mess. It’s not good. I’m spending too much time with my nebulizer and inhaler. Need me? I come with a bag of medicine and medical equipment… 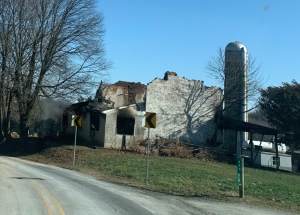 Look for an update tomorrow on my weekend ride… It was lovely and terrible and I’m confused.

16 thoughts on “I’m falling apart and my horses are pigs.”