I decided to head out to ride around noon only to find that a certain bay idiot has broken part of my fence… Not to name any names, but his name rhymes with hay. He left part of his tail behind as evidence… After fixing the fence, I grabbed him and off we went to the barn to ride.

Don’t let this cute face fool you… It seems like crap days happen when he wears his black boots… Correlation or causation?

Normally we get there and he’s pretty chill. Instead, he pawed the entire time in the cross ties and was generally annoying. My guy told me it was a good idea to throw him on the lunge line. So I did.

He proceeded to try and tune me out, but thankfully trotted and cantered and trotted and cantered and trotted and cantered…and tuned me out. Rinse, repeat. Once we lunged for a while, I thought we might be safe… Then he started to scream to every horse everywhere and tune me out again. So we lunged some more before moving down to the other end of the ring and continued, this time lunging over a pole. Every time I thought we could stop, he found some reason to tune me out. Idiot. Eventually, we found some common ground and did some in-hand work, and walked over some low fences. Finally, I got on (which was challenging because…idiot). 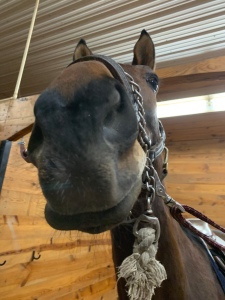 At the walk, Nay was fine. I was going to end there, but me being me, had to push boundaries. At the trot? Holy speed and lack of steering. Seriously horse! With the amount of time trotting and cantering, what the hell? Thankfully after almost crashing into a standard and one lift of his head, someone came to his senses and the rest of our ride was fine. We trotted, did some poles, and managed a few small jumps. I decided to skip the canter because I valued living.

We finished up our afternoon with a nice, quiet mane pull… Guess who doesn’t care about getting his mane pulled? Yeah.

Sunday? It was still cold but the horse I brought out didn’t resemble the idiot from the day before. Maybe he was tired, maybe he was sore, but regardless, he was quiet and normal Nay. I set up 4 low cross rails and on I got.

We trotting and worked on the set of poles and did some leg work with the spurs. Nay put his heart into everything. Somewhere in the ride, something clicked for me. At the base of each pole, I started added both spurs as practice for the jumps. Nay gave a little more. We did trot circles, Nay BENT, moving off the spur. Then we did our cross rails, adding spur and the base each time. Nay pushed off. Normally I sometimes remember to add the first time but don’t continue adding each additional time. This time? I continued to add the spur at the base EVERY TIME and what a difference it made. Something clicked for both of us.

His face is the cutest! His forelock is absolutely pathetic though… Still, gave me 115%

After our cross rails, we cantered. He was tired and maybe a touch sore from yesterday, but gave it his all. His left lead we’ve struggled with lately because he just wants to toss his head like an idiot at the in gate, but a shake of the reins keeps him focus. His right lead? Fabulous. He was tired, but just kept going and giving it his all. And, because we need to push a tiny bit past comfortable, we trotted a few cross rails to end and they were the best of the day. He truly gave me 115% this ride.

Not perfect, but he doesn’t look homeless anymore!

We finished with some final mane pulling and tail brushing (I’m determined to keep his tail gorgeous — it’s been knot free and silky since I washed it last week — I just keep spraying in leave-in conditioner and it looks amazing… of course no tail pictures) and all the treats in the world.