Well folks, we did it!

After 10 weeks off and way too much money spent on ulcergard, Nay Nay and I had our first rides back this weekend!

We started off on Saturday afternoon with me a nervous wreck and followed my vet’s plan for bringing him back. The main goal was to keep him as stress-free as possible. This horse is rarely ever UP (he just isn’t), but mentally is a worrier so we have a lot to deal with. Anyway, armed with tools, we headed out to the barn for our first lesson during Corona-Times… 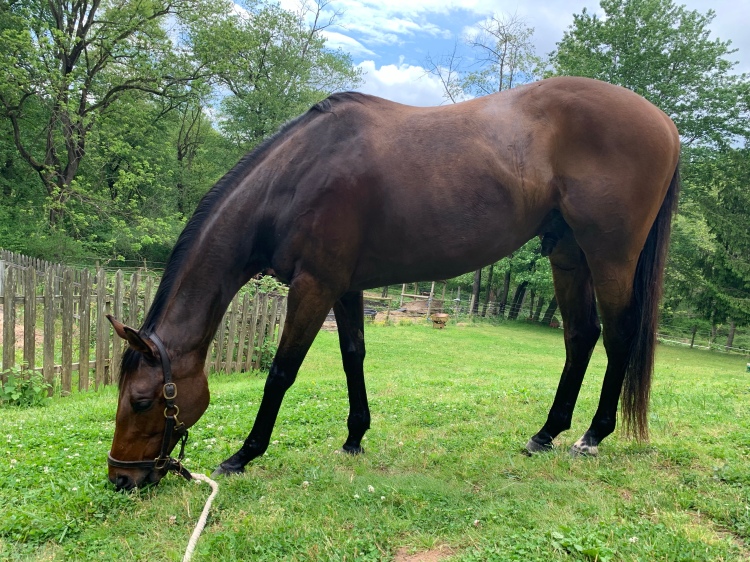 Someone has put on a good bit of weight! And his girth barely fits!

When I arrived, I was a bit dismayed to see so many people around (I have my own thoughts, but whatever). My county is still in the red but different barns are responding in their own ways. I already made plans to groom at home and tack up at the trailer so I tacked up, grabbed my gear back, put on gloves and found my trainer who told me both rings were empty (yes!), but that there was a lot of activity outside so her suggestion was we ride inside where Nay Nay was most comfortable.

Inside, I decided to lunge. He didn’t need it, but it was my way to just see what I was dealing with. 5 minutes of trotting (I even brought my own lunge line) just let Nay stretch his legs and see the ring again. Once we were finished, my trainer joined us and we got on.

And things were… Fine. He’s very weak and I had to remember to SIT DOWN. Omg. 10 weeks off and I forgot how much this horse wants my butt in the saddle! But otherwise? No big deal. We walked, we looked, and nothing happened. If you all remember our first ride? This wasn’t it. At one point, Nay’s head was on the ground. We trotted around and there were a few steps of canter here and there when he was “inspired” by the other horse who joined us in the indoor, but nothing exciting. In the end? We even canter each way. It was an easy, unexciting, and overall boring ride. I could have done all of this outside of a lesson, but I need to make sure I didn’t die! I needed that ground person!

Because Saturday went so well and all dinner and breakfast were consumed Saturday night and Sunday morning, I decided to ride Sunday as well. We went out Sunday morning to an EMPTY BARN! My favorite! I again tacked in the parking lot (Nay was a little looky so we grazed first), then lunged again (this time I asked for more: walk, trot — large and small circles — and canter), before hopping on. I also set up some poles.

I had a quiet and distracted horse under me. There was a pony outside who Nay was a bit… obsessed with. So, it took a bit of work, but we got through it and by the time we were joined in the ring, were walking with our head low to the ground. On Sunday, his trot was nice and relaxed, but, I found that I need those spurs back because no amount of inside leg was helping me push him out going right! Still, Nay happily trotted over his poles and definitely enjoyed them (though I completely forgot to put my dismantled jump back together… oops).

And then we cantered. He’s weak and the right lead is bad (picking up the lead is definitely not there), but for 10 weeks off? It didn’t look ANYWHERE as bad as I anticipated.  I even have video.

We’ll try and ride sometime this week and take another lesson this weekend. The outdoor is supposedly getting expanded so it’s out of commission (I had originally planned to use it Sunday and found all jumps removed and no gate or mounting block so…  But a new larger outdoor is exciting!

13 thoughts on “Everything old is new again”