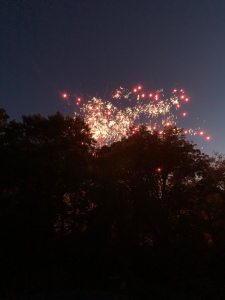 I’ve been struggling a little bit with confidence and motivation lately. Riding, it’s a head game. I haven’t been helped by being completely overwhelmed by work lately (I’m still at home and anticipate working from home through at least July 15 when we hope to begin some services on campus — this still means will be working remotely, at least in part). Somehow, I just have too much going on and I’ve internalized a lot and… It’s just put me in a bad place.

Riding and horses should be my escape, but I’m still getting to know Nay Nay and he’s green and while not unpredictable, my brain isn’t convinced he’s not. So I’m waiting for an explosion or a bolt to happen. It’s terrible but I just need time. 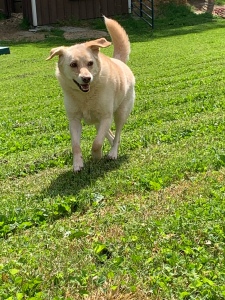 This cutie is always smiling

I tried to schedule a lesson last week and my trainer was…unreachable. Communication isn’t her strong point. People used to have set lesson times which made it easy to fit other people in. Then the pandemic happened and people started riding at weird times. Then people just started signing up on her schedule when they wanted to ride. The issue with this? If you text her when her schedule isn’t in front of her? She doesn’t schedule you and usually forgets to get back to you. This happened twice last week. I gave up. Then felt bad for myself and didn’t go out Saturday because I was in a weird place mentally (I also didn’t realize all this scheduling stuff, just figured that she wasn’t looking at her schedule and forgot–one of the boarders filled in the details). 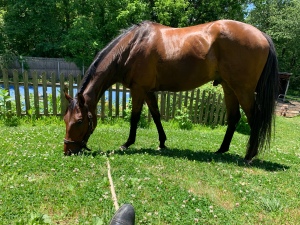 Will work for food

I went out Sunday knowing that a million people were going to be at a show. The first schooling show in a while and the barn would be empty. I hadn’t ridden my horse in a week. Not ideal. I did some lunging and he was pretty good, but Nay gets bored and loses focus pretty quickly and starts screaming… He does it out of anxiety and he does it out of boredom. It’s freaking annoying. After trotting and cantering each way, I got on.

We were joined by another horse and Nay was thrilled. He’s decided he loves having 1 other horse in the ring with him, especially outside. So I got on and found, for the first time ever, Nay had energy. We trotted and circled and changed direction and occasionally cantered a few steps, but he had energy. That said, he never did anything.

Eventually, we walked and let the other horse jump. Then we cantered. I rode like crap and could not sit back (tension), but nothing happened. I have no idea why I’m so pitched forward. Part of it, most of it, is being outside. I have this complex about the outdoor. But part of it is just staying out of his way and that includes a light seat. But I don’t need to be so far forward!

To the right? More of the same.  That said, he was feeling crazy good going to the right and tossing his head in celebration. What I got out of the right was that if he’s up and feeling good, but only tosses his head and keeps his hind end in check? It’s not really too big of a deal. So that was good.

When I got on, I put a fence down to a tiny little vertical and decided I’d work on that. We jumped it one way without issue (no video) — he carried me over a few times, then launched himself over because why not give it 150%???

I did get video of our 2 attempts to the right. The first time? He decided that trotting was overrated and cantered the last few strides because why not canter in on a horse who isn’t confident over fences… LOL. He was having fun.

He also had a crazy amount of energy. When I changed direction to trot it again, he took it as a sign to canter so struggled to bring him back to the trot again. So the next video is me telling him he as energy with him trotting nicely.

Before I left for the day, I did sign up for a lesson today. Cross your fingers I don’t die. I definitely need to ride more.

4 thoughts on “Riding the horse you have.”