(alternative title: how I bought a horse via text over breakfast)

So Facebook told me yesterday was the Batthorse’s 6 Year Anniversary. Unlike Subi, I don’t have the date etched in my memory. 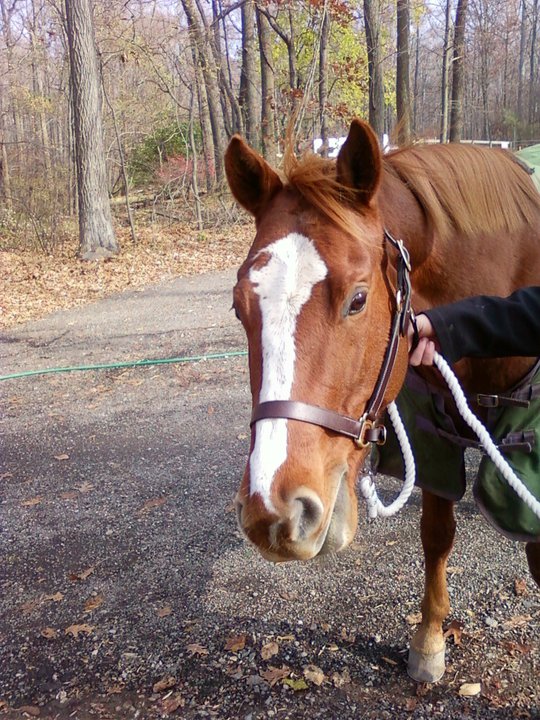 Batty was sort of a spur of the moment purchase that I tried to buy multiple times before–and failed. But his actual purchase was unplanned and came as a complete surprise and without any actual planning or thought.

So the story of Mr. Batman. Yes, I’ll call him Batman even though 99.9% of the time I refuse (seriously, how can you name a bright red horse Batman?!?!). He came to the lesson barn I rode at, worked at, taught at, as a young “5” year old when his previous owner realized he was way too much for her and donated him. Turn out, he was green broke and she was learning how to ride. By learning how to ride, I mean LEARNING HOW TO RIDE. In that she was walking and learning how to steer and post and with someone leading her could bounce around a couple of steps. His first day at the barn, I had a lesson on him and while he was a wiggly mess but had a gorgeous trot and canter. I think he was known then as “new chestnut.” We tried to jump and he was a complete green bean and I probably ended up in tears. We got through some lines but it was a disaster. My instructor told me I’d ride him again, but I doubted he’d actually stay at the barn too long. But, despite his green been quality, he was quiet. The next morning, he tore off 3/4 of his hind hoof. He spend the next 6-8 months on stall rest re-growing back his right hind hoof.

After he came back from stall rest, he was leased out to one of the barn teens who wanted a summer project and learned all about crossrails and verticals and still though ground poles were torture devices. He also expressed thoughts that solid jumps were going to eat him. 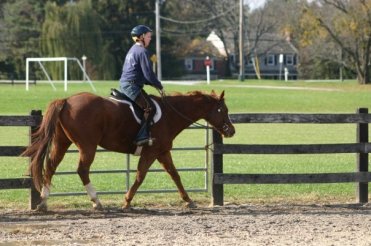 The lease ended after the summer and he was back in the lesson program. I had Subi at this point. I was teaching by that point (I think) and at some point, my friend Sandra started riding him. The time line is pretty blurry here. There may be a year or 2 missing. I have no idea. Anyway, the lease was the best thing for him. He was forgotten about and money was invested into him and as a result, no one remembered how green he was so he stayed. Thankfully, he was dead quiet too so that was good. Anyway, Batman was great for w/t/c and  less good for everything else. If he walked up to Xs and looked at them first, he was pretty consistent jumping them. Poles were OK if his ride could ride and steer and add leg and be prepared for him to jump the damn things. Basically, don’t set up a line of trot poles because that wasn’t happening. Over time, he got pretty good.

Thankfully, people didn’t like using him and when Sandra graduated college and was back for good, she started riding him regularly and he started improving drastically. It’s amazing how good Batty got with only 1 rider jumping him. With support to the base of jumps, he actually improved… Wow. As a team, we got to the point of consistency over stuff. Xs, verticals, milk crates, flowers, brush boxes, oxers, coops, and even the astro turf roll top (strangely, he had the least problems over that thing). I mean, he never jumped it first time and we always fought and had to build, but we got there (key point for later). 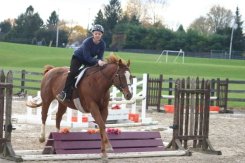 But, this damn horse was still dead quiet. In a lesson with another instructor, he carted a dead beginner adult around who was learning to trot. The bugs were bad and when swishing his tail, he caught it on a standard and dragged a jump standard about 6-7 feet. When feeling something was caught, he stopped, turned his head to see what was up, and waited for assistance. Now, that was enough to unseat his rider, but most other horses would have taken off. Not Batty.

The summer before I moved Subi, I was holding Batty for the dentist (or getting him from the dentist) and we were chatting about him. He asked me how old he was. I think I said 10 thinking we had him for 5 years at that point and he was 5 when he got him. That when he told me we were completely wrong with his age and by his estimates he was much younger. We did some math and he had to have been a green broke 2 year old when he had shown up at our barn all those years ago (what is wrong with people?!)…. At some point, Sandra approached the barn owner and asked his she’d sell him. She was quoted some outrageous price. 10K I think? For a stopper with some soundness issues. Yeah, ok. Needless to say she said no. My timeline is all mixed up, but I know that I also approached her when I moved Subi, but before I bought Hayley to see if she’s sell me Batty. After all, BO was always complaining that no one used him. I never received an answer. Strangely enough, I continued working for her for another year…

A year later, I taught my last lesson and Sandra came out hop on Batty for what she thought was the last time. I left a message saying as much, thanking BO for everything and leaving things on a good note. Then next morning, while eating breakfast with my mom, I received a text from BO saying she was getting rid of Batman. I read the text to my mom and the next thing I knew, my mom had me text back, “Is he for sale? And for how much?” and that was how I came to buy Batty over breakfast via text message and why it is my mother’s fault. She takes full credit. Still. To this day. All of this followed with a text to Sandra that read, “So I think I just sort of bought Batty…” 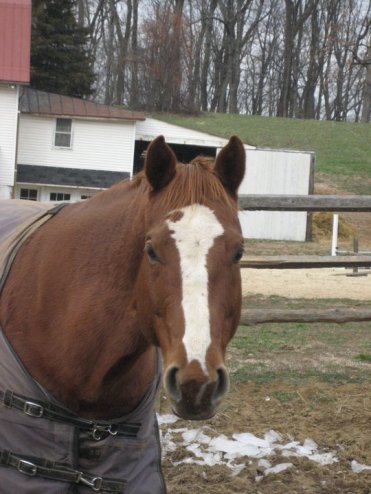 Since then, Batty’s lived at more places then Subi or Hayley. He moved first to a friends for a few months then joined Subi and Hayley and the self care place I was boarding before  moving down to Southern Chester County to my apartment before moving back to my friends place when I got pissed at my landlord for being a lunatic and taking away shelter during the summer while I went on vacation. They stayed at my friends while I waited to settle on my house and then waited to put in fencing (wedding gift from friend) and build shed before finally coming home. 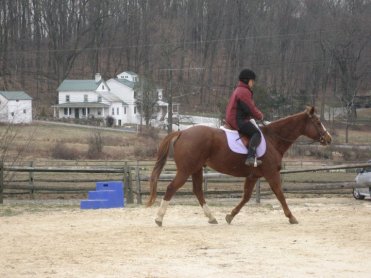 Since coming home, things haven’t been without challenges. We’ve had the whole trailer loading stuff come up…

Then the whole colic and New Bolton stay. 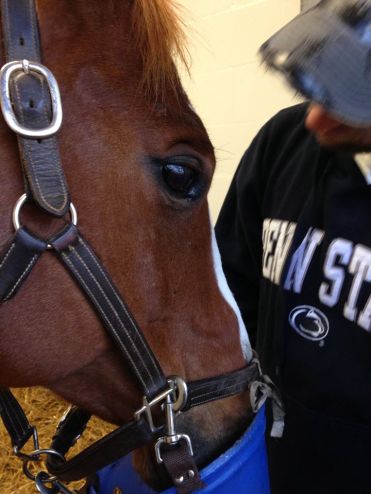 We tried becoming a hunter horse again and failed, but his true calling is just being him. He’s a crossrail expert and a hill gallop-upper extraordinaire. He likes to explore just so long as he doesn’t need to take the same path back home. But mostly, he’s just the quietest, best little appendix without a spook and trustworthy mount I could ask for. He may only have been officially part of the family for 6 years, but he’s part of my heart so much longer. 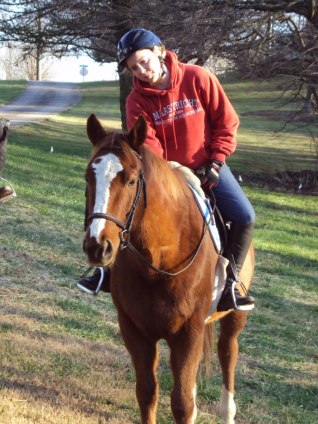 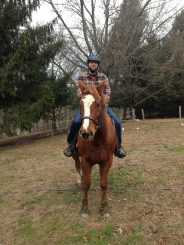 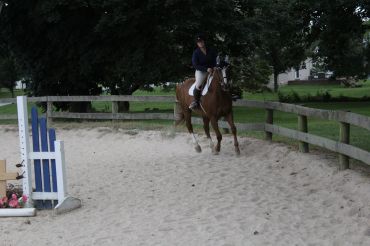 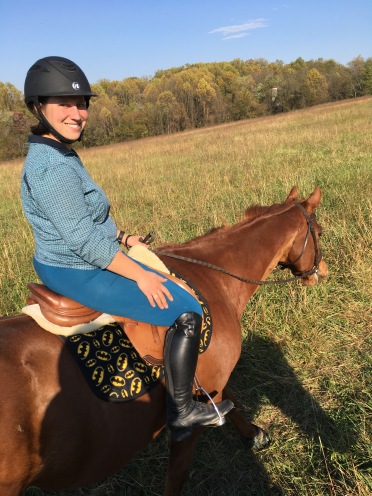 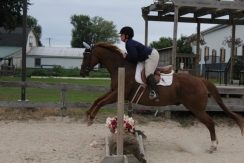 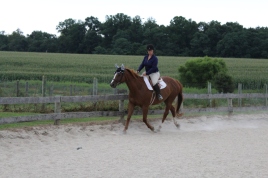 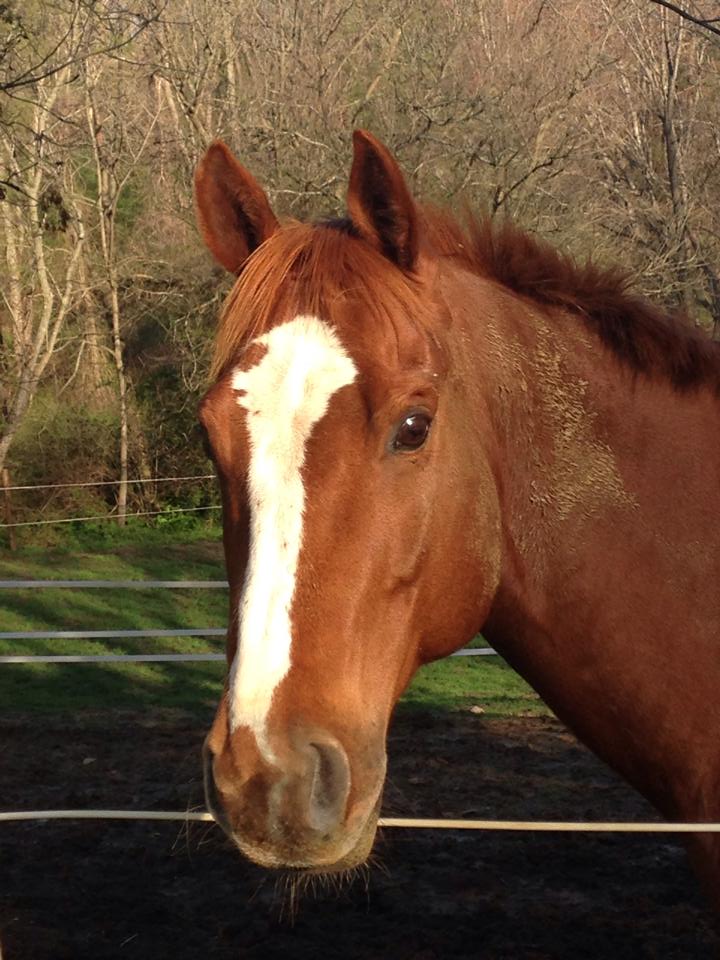 I moved my horses home a few weeks ago. It’s wonderful to see them again everyday and to have them right there in the backyard. Generally, I think they’re happy. Generally, I’m thrilled. But riding…

I’m battling a lot right now when it comes to riding. I’ve been out of the routine for months. Just with time, moving, the wedding, and the commute, I just haven’t been consistent. So my horses are showing that now that winter has come and I’m trying to ride again. I guess I should clarify. Subi is my issue. Batts seems fine, but Subi… I can’t say I’ve been all that comfortable since he bucked me off (nasty buck too) a month and a half ago. I haven’t ridden that consistently since then either. Again, life. But, now they’re home and I need to ride.

My friend Sandra and I rode for the first time at my house a couple weeks ago. We all survived and the horses were more or less good. But, the grounds been horribly mushy and out of shape horses on mushy ground and not level ground… It’s been a recipe for disaster. Last weekend, I came off almost immediately thanks to an unexpected crow hop at the trot. I’m not in shape so it is my fault for coming off, but it’s right there in my brain. I’m stressing because there isn’t a great place to ride at home.  I’m sure once the ground gets harder and the horses get into better shape and I get consistent, we can tackle all these issues, but until then, I fight my brain.

I did get on and we rode for another 40 minutes or some, at the walk, through the field, up some hills. Horses were exhausted and no one tried anything, but… I guess the issue is, at the walk, I don’t feel like I’m doing anything. But, if I’m making Subi work, even at the walk, maybe I am? Right now, the most level portion of my property is actually the woods. The horses are loving wandering through the woods and seem relaxed in there. There is a path way and I could easily (once I pick up twigs and branches) turn it into a trot and canter track of sorts. But, in the back of my mind, fear. So where do I go from here? I’m off for a week and a half starting Saturday and the plan is to ride as much as possible. Both Subi and Batts, as much as possible. Batts is fine. He’s quiet and just fat and lazy and should build confidence, but Subi… Should I just walk and do work at the walk? Extension, making him work and engage his hind end, and hill work?  If he’s tired, he won’t be stupid (and he rarely acts stupid at the walk–famous last words…) and maybe things will just fall into place?

I know the main thing is to ride more. I know that. But work and real life just get in the way. Why am I an adult again? I told Erik that any day we’re both off and it’s not raining, he’s riding with me. He’s not thrilled about it, but he’ll do it. All we’ll do is walk, but it’s another way to get the horses working more. Maybe we’ll explore the neighborhood on horseback as well? There are some nearby farms/houses with horses so it might be a way to meet people as well and find trails, etc. I invited another friend out next week as well and she’s game for exploring so…

I created this blog months ago and haven’t posted anything until today. To be honest, I’ve almost forgotten about it. But, the other part is lack of time and lack of motivation. But, it’s the Thursday before we’re closed for the holiday, I’m at work, and bored out of my mind. What better time to start then now? And instead of doing any sort of introduction (considering I’m mostly talking to myself), why not just start?  So there we go.