Lots to post about. A wonderful Subi horse. Less fear. An incident of suspected choke. A lame horse. My hate of abscesses. But, instead…

I’d like to introduce the newest member of my herd!

Thanks to my ex-landlords minis, I did not want a mini. Those things were evil. But, logic (though probably not common sense) won out and I got a mini.

I spent a month or so searching and found lots of crazy and scary things. Horrific conformation, crazy people, people who stopped communicating, mares in foal, stallions, feral minis. But, then I founds our little man and fell head over heels in love with his picture.

And then I met him and fell deeper in love.

Then he came home and moved into my backyard. Then he called to me when I walked into the house. Love.

The Subi fell in love.

Cutest pony in the world 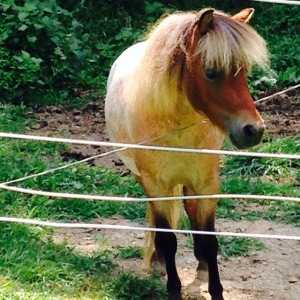