I hate the fall. Everyone who knows me knows how much I hate the fall. I hate the darkness, the angle of the sun, the shorter days, the crunchy fall leaves and dying plants, the darkness, and the angle of the sun (those both deserved a second mention). Good things have happened in the fall like all horse purchases but Jiminy, buying my house, and getting married, but I still dislike it. But every once in a while, fall issues a beautiful, unhated day. Today was one of those days!

I’m on the reference desk tonight (i.e. Now) and on Sunday so with comp time, I didn’t have to be at work until 5. Weather was perfect; temps in the mid 70s and sunny. So I took advantage of my day off to hang out with the boys (the little butterball definitely needs his muzzle back on when he’s out on grass…). 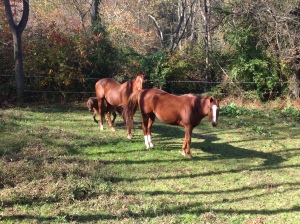 I haven’t ridden Subi in a few weeks so I tackled him first. Being home alone plus the lack of work he’s had, I played it safe and lunged first.

Really Mom? I have to leave my friends and work?

Thanks to the warm temps and living out, Subi was pretty quiet (almost dead) on the lunge line though he did have his idiot moments. Still, I’m glad I worked him pretty hard even though he was a sweaty mess.

After lunging I hopped on and we pretty much walked forever while he cooled off. I took advantage of this time to work on the evil known as 2 point. I’ve mostly been doing my 2 point on Batty because he’s pretty flat while Subi has the big old bouncy thoroughbred stride. That said, even with the bouncier stride and leg Subi requires, he’s so much easier than Batt in that he doesn’t get annoyed or bored as easily. So on we walked through multiple songs from wicked until I could 2 point no more. But we survived and by far had out best time yet.

After 2 pointing, on dead legs, we did some trotted over poles (during which I was surprised how strong my 2 point felt)  until we were both bored. Playing it safe (after all, I was alone and didn’t bother to let my husband know that I was on…), I hopped off and hand walked him around in the woods before getting back on out there. As expected, he was perfect and really prefers our “woods” ring. I really need to clear it out more in the spring so there’s more useable space. We trotting a bit (with much more effort and energy) before calling it a day. 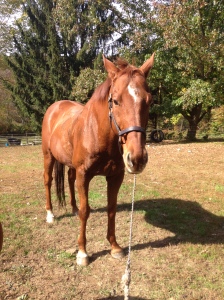 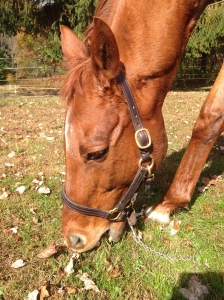 Somehow I managed to ride Batt after Subi. I have very little to say about him other than neither of us were feeling it. He’s bored hacking and I really struggle to get him in front of my leg at the walk and trot. He really just wanted to canter and if he could canter, he sucked back and sulked. At least at the canter I could get him in front of my leg, but… He would have been thrilled to pop over some jumps but I try not to jump when I’m alone. Next ride I guess… He just gets in these moods where it’s his way or else… Usually boredom is involved. I could have hacked him out but I had the dogs out so I didn’t want to leave them. In the end we survived, but…