Nothing too exciting to report. We had a really nice weekend weather-wise (in other words, unseasonably warm), so lots of trail rides. Saturday, I took out a nice couple down at Marsh Creek and on Sunday, Batt and I explored Fair Hill with a friend of mine.

Saturday was just my usual Marsh Creek excursion. I didn’t bring Batts down due to the warm temps, not having clipped him yet, and 2 new horses who had arrived the evening before from auction. I figured they needed some quarantine before I exposed Batts to them. So, I took out Sam instead. (For those of you who don’t remember, Sam is the 17.1 Belgian-TB cross who is pretty much dead quiet despite being 6).

Anyway, I like taking Sam out on trails as he’s slow, steady, and keeps up with his slow and steady buddies Poe and CT. Batts has no issues leaving CT behind… Despite his long legs, Sam doesn’t actually mind moving at a snails pace… 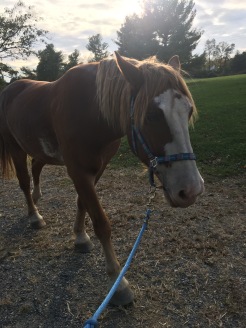 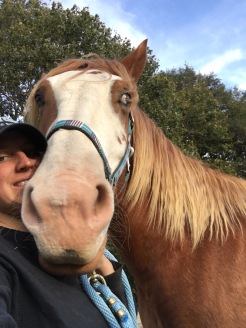 Needless to say, Sam was less than impressed by the whole thing. But, it was a beautiful day and he was a good boy. Hunting season has started in the park so we all wore our neon vests, but thankfully no hunters were hidden in our path. Nothing like a 17 hand fraidy cat jumping in place… We only did that once, walking back to the barn when we spooked at the barn pickup truck pulling in behind us carrying grain. How can you spook at dinner? 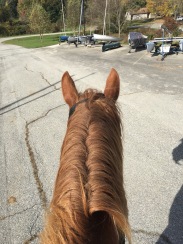 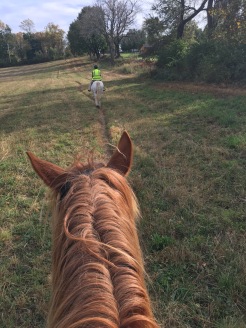 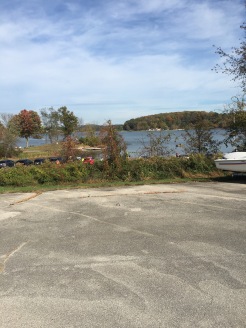 Sunday morning I finally got around to clipping Batts and Jiminy. Batts has been super fuzzy this year and Jiminy is always fuzzy. I hate  how sweaty both have been. I decided to try a bib clip with Batt and a chaser clip with Jiminy. I may end up with a chaser clip on Batt and a full clip (minus head/legs) on Jiminy, but we’ll see… Thankfully, both are good about clipping, unlike a certain other chestnut… (I’m pretty sure Jiminy has never seen a pair of clippers before but like a good mini, he takes everything in stride). 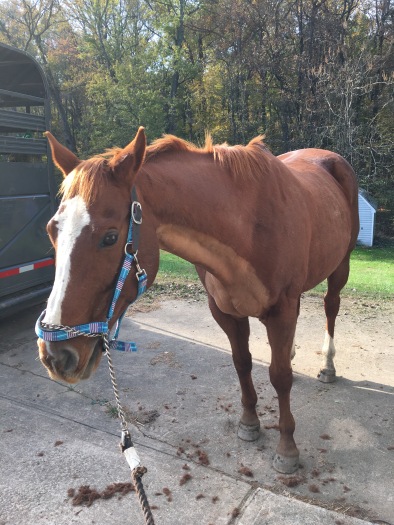 Instant Pony Weight-loss Technique! Batty, on the other hand, was less than impressed…

Later that afternoon, Batts and I headed out to Fair Hill to meet my friend Terry and her horse Bailey for an afternoon trail ride. She leases one of the barns out in the park, but despite that, we rarely ever get out to ride together. We were planning a short ride as Bailey is 28, but we sort of got lost and ended up staying out for a good 2 hours. They horses had a good time though. Unfortunately, while Bailey knows the park really well, we can’t give him his head as he’ll take us back to Fair Hill Stables as that was home base for a long time for him. As for Batt, Batt never likes going home so he’s no help. We eventually just turned around and took a longer route back and were find, but our cross country efforts were interesting… Bailey decided hills were meant for galloping up (seriously, you’re 28…) while I’ve learned that Batty is seriously the most incredibly amazing trail horse every. I’d have no issue with him galloping his hills or really anywhere, but I know Terry isn’t necessarily comfortable and was just trying to keep Bailey in hand so I figured I’d help out by NOT cantering up those hills, as tempting as it was for both of us. Bailey was good for Batty as well. All our bridge issues we faced in the past when out alone? No issue! He followed Bailey over without hesitation. 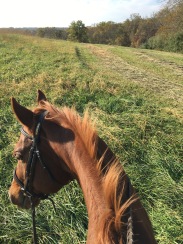 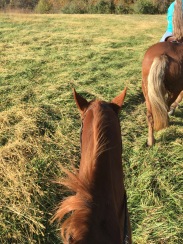 I seriously love this horse!

One thought on “Weekend Trail Rides (or, Batts and Bailey take on Fair Hill)”