It appears Ranger had a really rough week. He may have had some rough days last week too, though I’m not entirely sure since I cancelled my lesson last minute like a completely terrible person (like 20 minutes before my lesson… I’m awful) because Subi was lame, I freaked out, and then there was the issue of what turned out to be a horrible sinus infection AND the flu for me and a 102.something fever. So, I was probably good that I cancelled. So I’ll update on Subi later, though I don’t really know much and am waiting and seeing, but, honestly, I’m operating under he’s just retired forever. We’re not seeking vet care, he’s not lame, but he’s just off? Another post, another day. 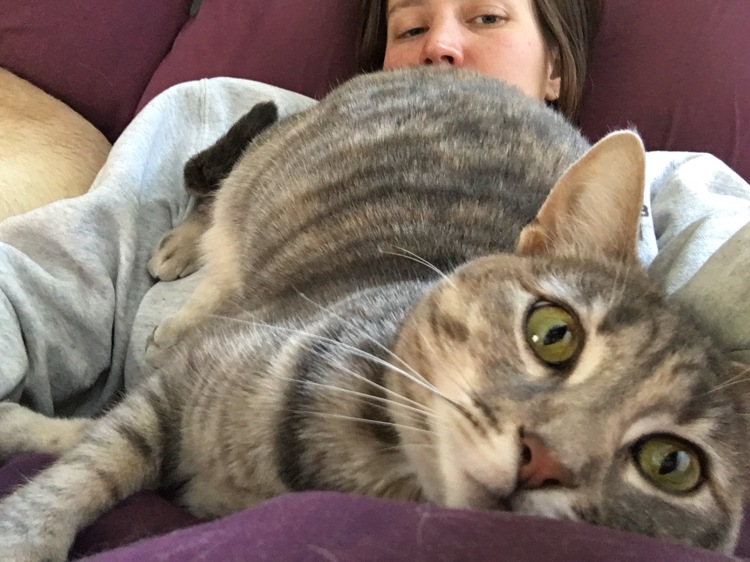 When you’re sick, sometimes a Lasagna kitty decides she is the cure…

So Ranger. Ranger evidently hasn’t exactly been the best behaved horse.  Which I have a hard time believing because he’s completely perfect. Other than 1 bad lesson last fall, he’s really been nothing but perfect. I’ve had an issue here any there with tight turns when I couldn’t ride and he didn’t help when I refused to sit up or do anything, but he’s basically perfect. So hearing that he’s been poorly behaved, well, I have a hard time believing it.

I got on early and basically just walked around while the lesson before was jumping around. I had no energy so walking around made me happy and I could have been happy doing just that. Then at some point, trainer mention that Ranger really needed me this week. And then mentioned 1) that he looked like the happiest horse in the world, 2) he’s had a rough week, 3) every time she says something like this I get on him and he walk around and prove her wrong and 4) he needs me. I love him.

So we warmed up with some trotting, bending, circles, during which she mentions, causally, that he took off with a child during the week. During that statement I noticed that the previous lesson left the gate wide open so if Ranger wanted to take off and take me to the barn at any point, he was free to do so. I was also asked if I wanted to show this weekend, but I’m busy with fun birthday and family stuff. This is super important** Moving on to the canter, Ranger took even move leg and we did a large circle to the right (easy) and a tiny circle to the left (hard side), down by the stupid open gate. We actually kept our canter. By this point, I had no energy left considering 3 days before I was still barely getting out of bed.

So, while I took a quick break, I learned more about poor Ranger’s week. In addition to his ring antics, he’s also broken up with his field mate and best friend Forrest as they’re too attached and are now no longer allowed to go out with each other. I guess being separated left Forrest (or Ranger) bucking/screaming/carrying on all day yesterday or today. Life is tough when you break up with your best friend. As a result, he’s been more crabby this week…

On to jumping. I refused to do any courses do to being dead and really didn’t jump much. Honestly, I was just happy to ride. The girls before me were stringing together 7-8 jump courses and I didn’t want that. So I prefaced jumping with that. So we started with a basic figure 8 with a strange approach basically having to cut between 2 jumps to approach jump 1 and then deep in the turn to the rail around the first jump of the outside line to the other inside single. Surprisingly, we did this perfectly the first time, complete with a nice, QUICK simple change. Now, normally I have a hard time with simple changes on Ranger because I die and we trot too many steps and then eventually get our canter back. This lesson, all our simple changes were perfect, single stride canter, perfect. Why? No idea. Because he’s perfect.

Not to scale, really bad attempt to draw the course. Several jumps may be missing…

So from there we when the other direction. So, down the first single, then between the 2 jumps (really freaking tight), tight turn to the other single away from the in gate. Despite the fact that when I turned I was, for a stride, looking at the WRONG fence, we got to it and got a perfect spot.  In fact, ever damn spot was perfect. **why can’t I ride like this when I’m showing? Even trainer made the comment about how disappointing it is.

So, despite being dead, we ended by going back to our first single (heading away from the in gate) and then continuing instead to our outside line in our 6 stride. Now, I hate this line and have an irrational fear of the last jump. It’s the stupid picket fence gate and straw bale. I just think I’m going to impale myself on the blunt gate. Why? no clue. Nonetheless… I also suck on the  turn to the line. But, I did my first jump, perfect spot because that was the order of the night, perfect change, because, why not, turned perfectly because, again, let’s not question things, and then the damn spot for the first jump was there. So, in order to not screw up the night of everything being perfect, I made a conscious decision to add leg (we were slow and I saw something), ride, and what do you know, the spot was there. And that was the night of perfect spots, on the perfect horse, that people were spreading false rumors about.

So I promptly gave him a large hug (again — he got lots of pats and hugs throughout because, well, why not?) and stuffed his face with carrots and peppermints. I try to stay out of his way when I ride, but if Ranger likes me, I think it’s because I stuff him full of treats after every lessons.

3 thoughts on “Ranger Recap: breaking up is hard to do?”