Yesterday marks the 4 year anniversary of a day that really changed my life in ways I had no way of knowing.

4 years ago I came home from work a little early (I had a migraine and I think I just wasn’t feeling work and wanted to lay down) and went out to feed Hayley her “tea.” Hayley got a mid day meal we called tea. Normally Erik fed and he had the routine down, but since I was home first, I decided to feed. So, part of the routine was clearing everyone out of the paddock/shed so I could feed her. I decided to untie the hay nets first and had her bucket waiting in the lawn.

It was muddy and for some strange reason Batty was hanging out in the shed (he uses the shed when there’s food in it and when it’s raining or snowing). So I went it and starting untying the nets. Hayley runs in and sees Batts and charges out, bucking. ***Please keep in mind, this was my crippled mare.***

On her way out, she bucked and clipped me in the head. Remember that there was a whole lot of mud in the shed. I fell forward, grabbed the shed to stop myself from falling snapped my head back, basically rocking my brain around my skull a few times. But, I didn’t fall in the damn mud. Anyway, somehow I didn’t lose consciousness and got myself out of the paddock  with the hay net (I think the hay net ended up on my bed), but I don’t think I fed Hayley. Details are fuzzy. Looking back, I actually don’t have a lot of memory of this beyond what I’m writing which is freaky. 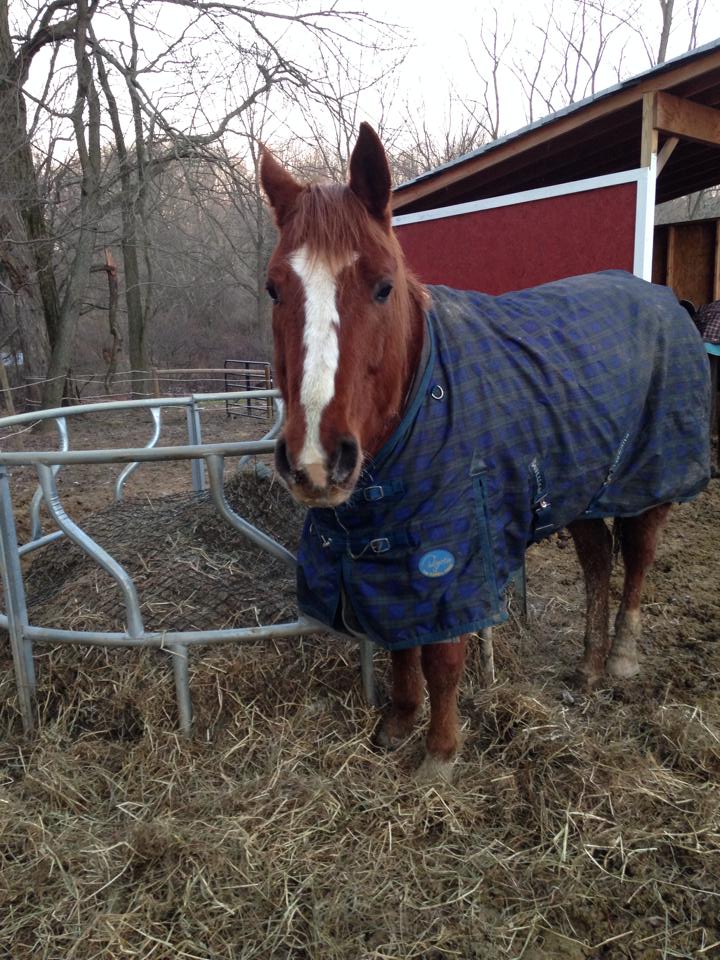 Sweet, innocent Hayley. I feel guilty that I never trusted her completely again. And I tea was 100% my husband’s responsibility. I could do breakfast and dinner but not tea.

So I called my husband, argued with him about going to the ER when he got home (I was in the against column), called my aunt, chatted her for awhile (in all honesty, I was trying to stay awake and alive and conscious), and then I looked in the mirror, saw the shape of a hoof on my forehead and agreed to go to the ER when my husband got home (I’m sure he’d have made me go, but…).

Of course, the idiot ER doctor was the start of my problems. After determining that I had no skull fracture (thank you for being barefoot Hayley — I’m actually paranoid about putting shoes on anyone now — I’d likely be dead) the idiot told me since there was no fracture, I had no concussion. I mean, I didn’t help by arguing I was fine, but anyone could tell I wasn’t. I was told to follow up with my primary in 3-5 days and take ibuprofen if I felt pain. And maybe I could use some ice, but only if absolutely necessary. And there was no reason not to go to work.

So, the next day, feeling like crap, light headed, sick to my stomach, with a pack of ice, no sleep, and near constant ibuprofen, I went to work. By noon, my boss sent me home and wouldn’t let me work my weekend shift. At some point I made an appointment with my primary care doctor’s office and they couldn’t see me until the following Wednesday. I can’t remember if I tried to go to work Monday and failed or if my boss banned me until I saw my doctor. By my doctor’s appointment, I couldn’t drive, walk in a straight line, or, guess what, talk in full sentences. I could get half formed words and that was about it. Holy concussion. And it got worse from there. 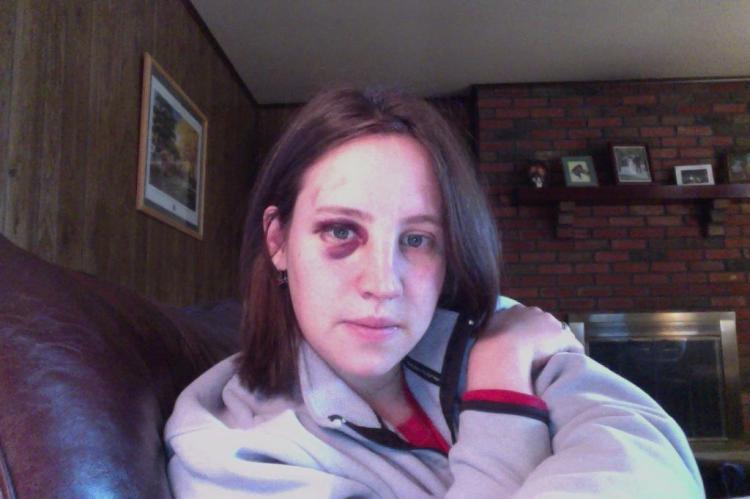 (Weird backwards computer selfie…) Dropping black eye. You can see the mark on my forehead above my eye where I got kicked. If you look at my other eye, you can see bruising is starting and a second black eye is forming. They both ended up black.

So my doctor was furious at the ER for being stupid. Furious at his office for hearing the words “kicked in head” and “head injury” and NOT getting me in immediately and fearful that the idiot ER may not have order the right scans or failed to read them right (thankfully, in we were clear in both cases as the ER did something right).  So, I was out of work for a couple of weeks until I was cleared… With the warning to avoid future head injuries…

That said, 4 years later, I still deal with some post concussive syndrome stuff. When I’m tired, I lose words. When I’m stressed, I lose words. When I’m overwhelmed, I lose words. It appears, losing words is my lingering symptom. All of this was made worse by not resting right away after the concussion. While I didn’t have any immediate concussion symptoms, they can take a 1-2 weeks to show. That’s why it kills me when people are so sure they DON’T have a concussion (me included this past fall…). The kick was a huge part of mine, but the not falling and catching myself was actually the likely larger culprit for my problems. I saw an improvement after a year, but at this point, I think the rest of it is here to stay.