This week needs a do-over. Or maybe this week just needs to have never happened. But, a quick recap to the week basically could be summed up in a few words: stress, soul selling, chaos, and storms. Oh, and Dr. Seuss. How do people NOT know that Friday was Dr. Seuss’s Birthday? I’m seriously ashamed. I’m more ashamed that I work in a library and people STILL didn’t know that (yes, academia, but still…). 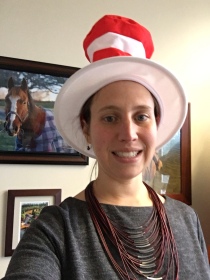 Anyway, I carried much of the week’s tension in to my lesson with Ranger on Thursday. And a headache too. So our flatwork semi sucked. Especially the canter as I was carrying so much tension in my shoulders… Shocking, I know. I wasn’t quite able to fix it, but sometimes you just can’t. Second direction was a little better but…

We ended up doing a semi private this week so I didn’t actually get to do too much which was fine. And it was Ranger’s second lesson of the day and he wasn’t feeling it either. But, what we did, we did well, so there is that?

We started out basically working on an exercise for adjustment. We cantered in to the outside line which is a 6 for us, in a holding 7 and then continued around to do it in a 6 and then came back around to do it in a 7. The first time in, the 7 was actually there and it wasn’t an issue and with a little hold Ranger collected and easily fit in the 7 and there you go. Coming back around, we lengthened, and came it nicely, got the 6 life was easy and happy. However, continuing around, attempt 3, was not as successful. We came in with the right pace that we needed for the 7, but when I asked Ranger to hold for the 7, he interpreted my hand for a cue to trot, unlike take 1 so we ended up trotting in the middle at a pace for a stride or 2 before cantering what would have been a 7. Turns out, with Ranger, I need to remember that I can’t pull back on him most of the time, but I have to remember my “tug tug” method with him (a lift up of sorts) to get him off of his front end so he can collect. So, picking back up the canter, collecting the stride, I tugged coming in and immediately upon landing and what do you know?! The 7 was simple and easy… Go figure… These things are always easy when your heavy horse isn’t heavy… shocking.

“Are you calling me heavy? Are you saying I have a big head?”

We next changed direction and cantered into our inside single boxes from the wrong direction (got to love jumping jumps backwards…) and then continued around to the OTHER outside line where we were to jump the line in a slow, holding 8, continue around, and then jump the line in a forward 7, and then back around in a holding 8. Having actually learned from the previous line, we accomplished this the first time with zero issues at all and it was easy and called it a day there. It was unexpected to all when my trainer says “you did that much fast than I anticipated.” Well, I can ride when I remember how… Plus, my old trainer, when she remembered how to teach, loved this exercise and we spent insane numbers of hours adjusting strides. I think I only ever did the horse show strides at horse shows… All Subi and I ever did was stride adjustment exercises and drove ourselves insane… When she remembered to teach. And then I left.

So we spent the remaining time just watching. I was offered the opportunity to jump something else if I really wanted, but, it was one of those, my jumping was so on, and my day was so off, I just didn’t want to push it. So I just sat and watched. Ranger didn’t appreciate it. He wanted BACK TO BARN FOR TREATS. Whatever Ranger. So I got a lesson in watching for the remaining time. The many face of Ranger need many treats

Yesterday was the storm of storms. At least in terms of wind. We didn’t actually end up with accumulating snow just lots of wind, power outages, and gross-ness. Horses survived (spend the night tucked in the shed–this morning they’re out playing halter tag), my property survived, and all that. My power was out most of the time I was at work, but came back on once I got home (yay!). Driving home was fun though. Especially the big hill near Fair Hill — our half ton truck was being toss around. I can’t imaging what it would have been like in a car. Today, lost of damage around, but we’re unscathed. Some trees down in the woods, but since most of the big ones are down, I’m hoping I can convince my husband to let me fence it in for the horses… 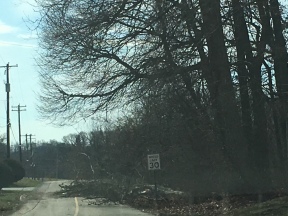 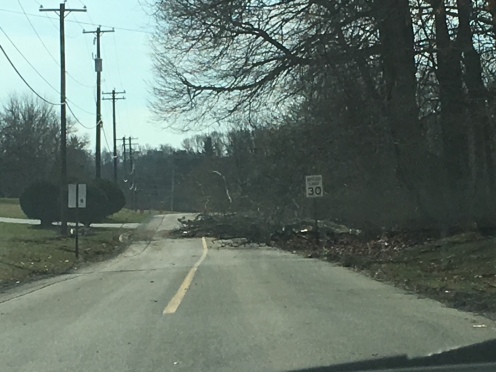 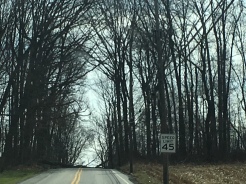