I FINALLY had another lesson after 2 weeks off from lessons due my trainer away at horse shows (I did get to ride Ranger but not as much as I had hoped due to migraines and a heat wave that, quite honestly, left me not wanting to ride).

But it was so nice to be back that I took absolutely NO pictures so deal with old media?

Never too much of this face

I got on a bit early and just chilled on Ranger. He’s really a good couch. To be perfectly honest, if all I did that evening was sit on his back, I would have been 100% happy. I can’t describe how much I love this horse. He’s perfection is ALMOST every way (my ears will talk about that later…).

We did out normal w/t warm up with circles while the lesson before us was finishing up. Forward, thankfully, wasn’t an issue, though circles were and the effort it took to loosen Ranger up to right to get him to bend was something else… He was stiff as a board. Supposedly he was worked some already (beginners), but based on how much his neck resembled a 2×4, I’m guessing I was the first person to ask for any sort of bend. He rented the bend not the work. He has quite good work ethic. Eventually he gave in to my inside leg and rein and relaxed his neck and we achieved a nice bend and moved on. So exciting. Seriously. Like watching paint dry. On a 2×4.

Cantering was nice. Our first direction. Relaxing and lovely. Then his friends left. And all hell broke loose. I mean, he was lovely and well behaved just a bit forward and screaming at the top of his lungs. See, Forrest was in the ring with us and OMG I LOVE YOU BFF FRIENDS FOREVER. So, yeah. Screaming. Ranger’s downfall. My poor ears. It got old. Really. Really. Fast. But, we forgot we were fighting me on bending so win?

We warmed up with a our log jump by cantering in, landing and turning and reapproaching based on whichever lead we landed. So turn right and approach from the right if right lead, left if left lead. We landed each lead 1x and then moved on. Meanwhile, my trainer had her daughter set up fences and don’t let a 9 year old put up jumps… Some of the fences were up already from the previous lesson, but now I have 2 3′ fences, a 3′ oxer, and a small line and a small vertical to warm up with. Thanks. For the oxer, the directions were to put it up a bit (it was 2’6″) and then she asked if she could make it an oxer… Oy. “Sarah doesn’t want to jump small jumps…” — Actually, Sarah doesn’t care!

Old view of the course. Jumps at different heights but you can see the log. Landed and either went right or left and reapproached.

We started off with the vertical (which was actually the second jump on our inside) heading towards the barn around to the other inside line. The line was nice and small (2’3″) and while I was nailing the single vertical, I struggle SO MUCH with the approach to the in of the line! First time through, I cut my corner a touch and chipped. Second time, I stayed out, but then we had left drift. Third time OR fourth time (I lost track), we were to continue around to the massive 3′ oxer that I was giving the side eye… Thankfully I rode the line better this time and didn’t die with the oxer… MASSIVE outside leg was required to keep a certain pinto from left drift to the inside line. 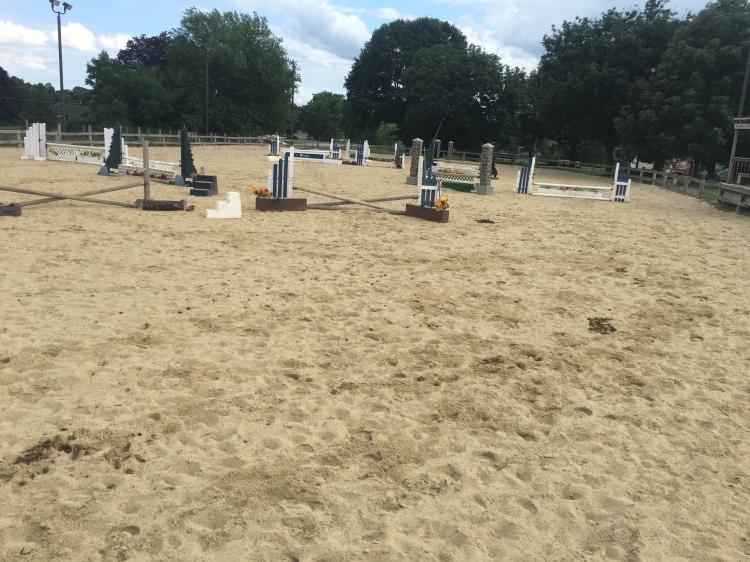 Where the X with blue/white standards would be the vertical and the tree jumps would be the inside line (can’t see the second one well but bother were similar height 2’3″ ish).  Outside singles can be see here too but just raise them a lot make the one left of screen an oxer and the inside jump is between the stone pillars

We changed things up the next time and moved on from this and instead did the OTHER outside single around to the inside single around to the outside oxer again. I’ll be honest, I never 100% got this. I got each part, but never completely put it together. And the more I started thinking, the less things worked. And we all know, thinking IS NOT A GOOD THING, at least with me. So, I would get the first jump, and then my trainer would tell me NOT TO CHANGE ANYTHING so I would somehow interpret that to mean SLOW DOWN and change my pace rather than keep my leg on… then guess what? The spot I would see would suddenly disappear! Amazing how crap like that happens and we’d chip a 3′ fence… But still clear it because Ranger is a saint. SAINT. Or, we’d swap coming up to it to make it work… Or, I’d ride PAST the distance. Then I’d realize I’m an idiot and fence 3, the oxer would be perfect. Or, I’d screw up jump 1, and come to my sense and jump 2 and 3 would be perfect. Basically, jump 3 became perfect. So, finally, getting exhausted, after attempt 4 or 5, I asked if I could leave out jump 3 because I didn’t want to start screwing up that jump after 5 perfect attempts in a row… So after another go or 2, we then just had jump 2 to contend with after perfect jump 1…

Believe me, it is possible to continue to screw up a single fence multiple more times…

Finally I decided to pick up my canter half way around the ring, start counting my 1-2, 1-2s OUT LOUD and what do you know? Perfect fence. I had just gotten in my brain and not given myself enough time to establish a pace… Ranger wasn’t helping either as by that point he was back to calling to Forrest… And trying to slow by the gate… I think picking up the canter early he realized I meant business…

Thankfully, by jumping that fence well, we ended.

Ranger got to reunite with Forrest (well, first there was screaming in stalls, and baths, and almost accidental turn outs of the 3 horse in their 3-some Mikey). And eventually, my hearing returned to normal. 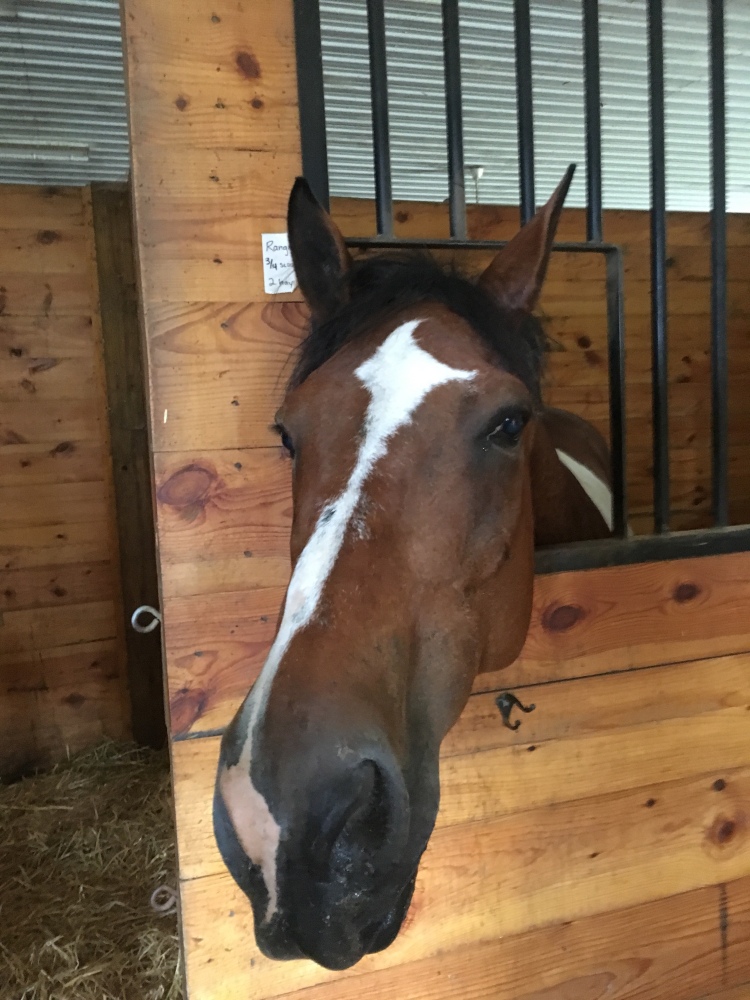 3 thoughts on “Ranger Recap: Getting back in the swing of things”