This edition of Ranger recap takes an interesting turn as it features Bob rather than Ranger (Ranger did get treats).

I was able to sneak in a make up lesson today (Sunday) but the offer came with “we’ll try someone different.” I figured I’d ride Forrest and he was an option, but when given the choice between Forrest and Bob, I chose Bob.

Now, I knew nothing about Bob, I just knew he didn’t remind me of Subi in looks and way of going and that was a good thing. Emotionally, I couldn’t handle chestnut ears.

Bob was a bottle baby supposedly so he is a bit mouthy, but other than manners, he’s a good boy. And huge in comparison to Ranger and even Batt… lol 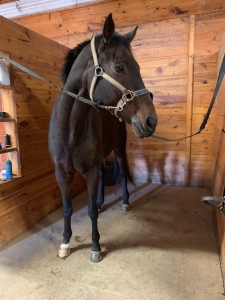 Much to my surprise, I was actually able to get on. Lol. I was worried that that might not happen 😂 but fear not, my foot did reach the stirrup without anyone dying. And we survived the hack portion of our lesson. Lol. Bob actually bends. Very strange. At the canter we worked on changes. Or rather, I started to cross the diagonal and Bob changed leads. I was told to set him up and he’d change the second I asked, but I did nothing. I started to turn and Bob took over. So yeah, must work on having control. 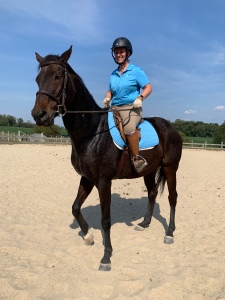 Then jumping… so yeah. This is where the wheels fell off a bit. [we mostly worked with the outside single both ways and then added the inside single]. So Bob isn’t a lesson horse. He likes support to the base and with long spots, squeezing to say, yes, we do jump this. Ranger just says, screw it I’ll make up for every last mistake you make, lady, just get me the treats!

So first time through, I forgot how to ride and we went wide turned last minute to the fence and stopped. 🤦🏻‍♀️ Took 2 attempts to get over then had it, the other direction, same issue. Not with going wide, but with not riding to the base. Bob also decided that if I wasn’t 100% committed, why should he help. So, crop encouragement, turn, too much pace, issue.. but we got through it.

Somewhere along the way, my trainer said the magic words. Collect the canter until 3 strides out and THEN squeeze like crazy. All of a sudden we jumped everything. Granted, it was 2ft and we were stringing 2 jumps together but it clicked.

Of course, before it clicked, I also had to make sure I wasn’t ruining him with my errors but was told no, just need to learn his buttons. Once I do, he’ll take me over 3ft and I’ll wonder how I ever found him hard.

So it appears Bob is the new ride for now. My trainer wants to watch my confidence, but I said if it looks like it’s taking a beating, just throw me on Ranger for a lesson or 2. I need the challenge and lets be honest, does Ranger really need to be jumping 2’9/3′? Probably not. Just because he can doesn’t mean it’s not time for me to move on at least temporarily.

So for now, hello Bob. 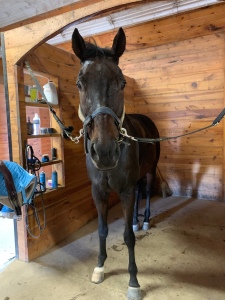 Hot and sweaty! 88 in late September! No thanks!