(All media is from Sunday)

It was a big weekend for Nayners. Saturday he saw the farrier, Sunday we hauled out for a practice ride, and Monday we had hauled out for a lesson. And you know what? Someone was a very good boy for everything. 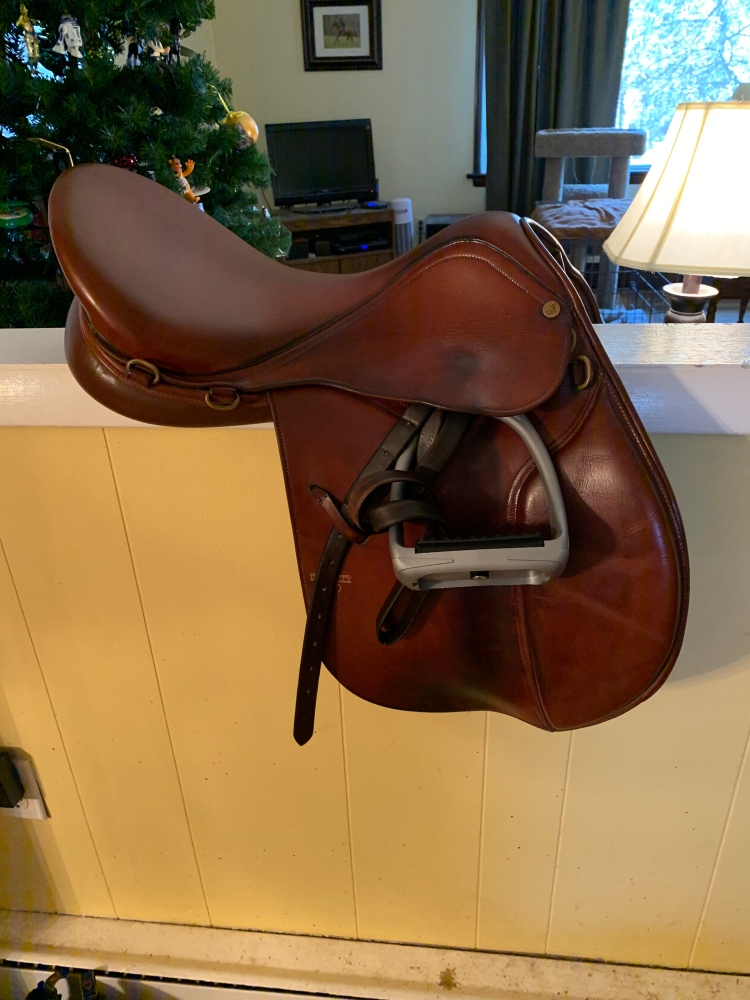 Trying to find a saddle that fits. Pulled this out of the basement. Fits better than my other though it’s so deep…

The farrier appointment was uneventful, but it was nice to get that one out of the way. My farrier liked his look and build and Nay behaved himself so, win? 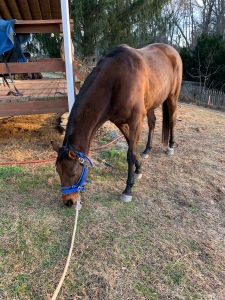 Sunday we introduced the clicker and he seemed to pick it up pretty quickly. He is food motivated so tapping his nose on a bucket lid and getting a piece or 2 of TC Senior? Score!

When I brought him out to trainer’s barn, the clicker definitely came in handy. He was better on the trailer but a touch nervous when we arrived. A couple halt, click, treats got him refocused. I let him play before tacking up and then clicked when he I got my good responses during tacking (brain melted a bit). I was all set to get on when trainer’s husband backed a trailer next to indoor and made a lot of noise before walking 2 horses off together. Brain blown. But. We backed, click. We halted, click. And a few minutes later, I was the focus.that click is powerful. 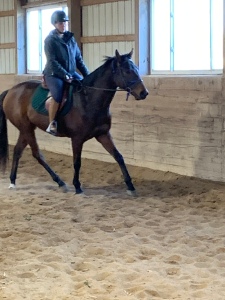 Our ride was lovely. I only wanted him to relax and he did. We walked and halted. And trotted some each direction. And called it a day. The clicker came out for the halts followed by a nice wither scratch. Nayners seemed to understand that was his reward this time. And with that? We went home.

Monday’s lesson was more of the same. I tacked in the 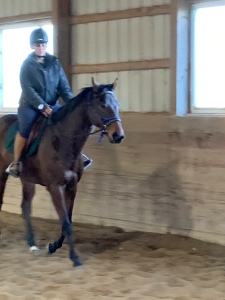 driveway before heading to the indoor with a slightly more tense horse (dogs barking at him plus farrier shoeing plus dogs just barking) and inside horses were jumping. We lunged for maybe 5 minutes at the trot and then all was good and I got on. Tension released.

We hung out with trainer while previous lesson finished and watched the big and scary jumps. He liked being held for them. But the last course, he did ok when we were set loose even though he didn’t like getting hit by sand. A little nerves but settled right away. 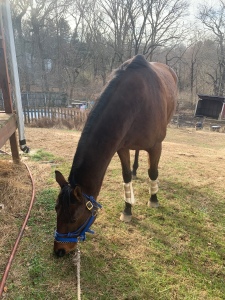 We started off playing follow the leader as we were lessening with RANGER!!! So we walked behind him for a while then we trotted. The name of the game was NO PULLING on his mouth and let him trot. He can go slow, he can trot not fast, so as long as he’s not fast, I don’t get to touch his mouth. I would be told if there were reasons to pull… there weren’t.

At some point, Ranger got to walk while Nay and I kept trotting and circling both directions. A pole was put down for me and I misunderstood so I trotted over the pole with flowers first. “Grabbing mane in case he jumps to the rafters” wasn’t a thing but squeezing to keep the trot was. We were unconcerned. We repeated both poles successfully and walked.

After watching Ranger canter, we got out chance. While I canted Nayners at the rescue, we’re taking a different path now. So, we basically canter down the long side and halted at the wall, using the wall as a stop point. No pulling prior to asking for the halt. I completely misunderstood this the first time and continued around the corner then trotted, but got it the next 2-3 times. Canter was quick but we’re not regulating pace right now (and like everything else, I sure it’s not but rather just felt that way). 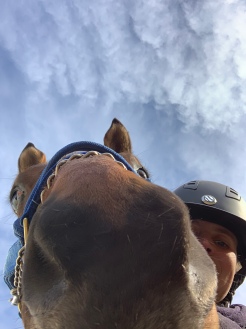 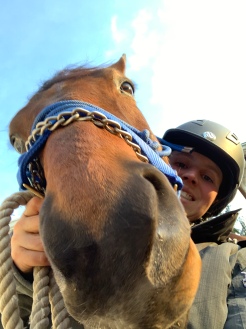 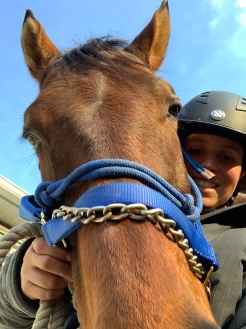 We watched Ranger jump (not scary!) and called it a day. Such a good boy! Hopefully I can get in another lesson this week on him and fit in a Bob lesson before I head back to work.