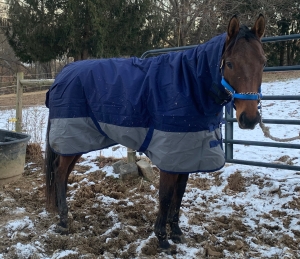 It wasn’t always warm. Just a few days ago it was freezing and snowing… I may have just ordered him another of these in a heavy…

Nay and I FINALLY got a lesson in this weekend…after not riding for a week. On top of that, the weather decided to go crazy here in the mid atlantic and Saturday saw temperatures in the 60s. In January. Personally, I HATE warm winter days. Perfect recipe for people and animals getting sick. And for migraines. But no one asked me.

Not related to Nay, but instagram told me Horizon Structures was having a sale… on SUBI?!?!?!

We arrive and the barn was chaos. Everyone and their mother and their third cousin’s best friend was there. I managed to park my trailer, but… Go home people. Nay was good to tack up in the driveway (he’s gotten SO MUCH BETTER) and we walked over towards the indoor (hopes raised) where my trainer was standing. She did give me the option but there were SO MANY PONIES (seriously ponies everywhere) inside so I agreed to go outside if she made sure I didn’t die. We then tried to spook at a stroller coming out of the indoor… lol. I’m telling out, it’s all my anxiety.

We took a semi private with another young horse, Wilbur. That said, Wilbur is now showing, jumping, etc. but still has his green moments. I started off by hand walking Nay around the outdoor. He didn’t care. Because, why would he? He was more alert, but that was about it.

Once on, we wandered. Wandering is our pastime. I tried to sit up and keep my leg on him and sit in the saddle vs on the saddle. He likes that. He slows down when I do all of that. After wandering for a while at the walk, we got the all clear to wander at the trot. The goal? Keep his brain busy with turns and changes of direction. For the first time ever, I was allowed to ask him to slow down and encourage the trot from his hind end (by sitting back, erg). Eventually, we added in a pile of poles. Nay loves his poles so this was fun for him. After successfully doing our poles both ways, we eventually walked and watched some jumping for a while.

It also appeared my barn was for sale…

So, when I first got on? There was no question that we were NOT cantering today. Yet the more we walked and trotted, the more relaxed Nay got. He spooked once at the very beginning because the wind picked up and a gate went clattering and he scooted into the trot a few steps but that was it.  So, after we trotted, my trainer told me, never mind, we will be cantering…

We started off with the left lead. The first time? Eh. Ugly. He didn’t pick it up right away and, instead of being patient, I added leg and he scooted into the canter on the wrong lead. So, it started off a bit quick (not fast, quick) and rushed. Since we don’t care about leads, he tried to canter around the corner but was distracted (horse was walking in when we were approaching the gate) and off balance and… yeah. So we went back to the trot and eventually walked and I got the talk… Basically, TAKE MY TIME AND STOP WORRYING ABOUT WHEN I PICK UP THE DAMN CANTER… 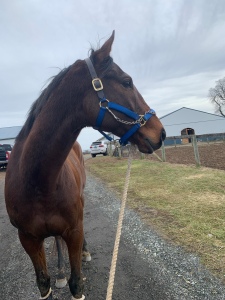 He’s becoming such a good traveler!

As a result? Take 2 was lovely. Nay picked up a quiet, slow, and relaxed canter that we held 3/4 of the way around the ring.

Before we picked went to pick up the right lead, we watched some more jumping. Then, a pony went on a walk around the indoor arena and Nay lost it temporarily. [Lost it now means lost focus and ears super forward] With some direction, I did a little trotting to get his brain back in his head. And right lead canter? Our best ever. Quiet, relaxed, and slow. The comment? “Well, wasn’t that adorable!”

Not the most exciting lesson, by outdoor arena conquered! The worst part? My saddle just isn’t going to work, not even for the short term. So, we’re 2 saddles down, a few more to try (or, I listen to Emma, and go saddle shopping/trying courtesy of MD Saddlery). I need to look into consigning my Millers at this point because it’s just not working for me (it fits Nay relatively well, but my trainer is hating the position it puts me in). I’m just not tied to it anymore so it can go.

12 thoughts on “Yay or Nay: Conquering the outdoor”