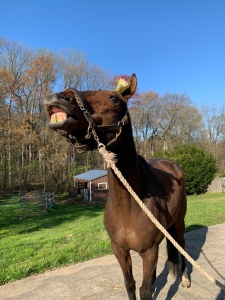 It appears I skipped this gem the other day… Smile! It’s your birthday!

Blog content is slow around here. Honestly? There’s not much.

But, I have my boys and I’m super thankful for them.

A couple of times a week I started morning snack right after I turned Nay Nay and Subi out. A couple times turned into a few which turned into daily. Honestly? It’s the highlight of my day. Snack is usually peppermints. Sometimes hard starlight peppermints but sometimes puff peppermints. Somedays snack is carrots and other times includes apples. If I ever take the nickermakers out of the truck, they’ll also be included in morning snack. Jiminy sometimes partakes but is usually still in his stall. I’m mean! But he also doesn’t need extra sugar… A few times a week he does get a small snack (he also sometimes doesn’t realize snack is happening and gallops off to the hay feeder so there is that too). 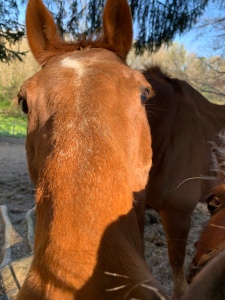 Yes, people will saw mugging horses is bad, but they are SO HAPPY and they happiness makes me happy. And right now? I need all the happiness and smiles I can get. So snack continues. For a while, I doled out snack from the other side of the fence (Nay standing appropriately far away from the hot fence wire), but I missed those soft noses. So I’m back to bad habits and providing snack from inside the field.

I’m not sure if he’s licking hot wire… Freak.

In other news, as a hay feeder update, I ordered Nay the Slow Feeder Saver Junior from SmartPak and it should be here by Monday (drop shipped from manufacturer in Iowa). I also spoke to High Country Plastics who makes this feeder as well as the others I was considering and they talked me out of the CF-24 Corner Feeder as they didn’t feel it would be the best for my purpose, but said that if I did want to order the CF-32 Corner Feeder in the future, most of their suppliers can order it WITHOUT the dividers as a special order which was why I wasn’t seriously considering it. Removing the dividers would actually drop the price even though it would be a special order. So, if the Slow Feeder Saver doesn’t work out for Nay, I can transfer that to either Jiminy or Subi and reach back out to High Country Plastics and find a retailer to special order the CF-32.  I can see now in the picture that the compartments are screwed in. 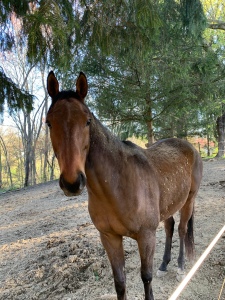 For a cheap horse, he’s VERY expensive. But he’s a good snuggler. And very goofy.

I also think Nay needs some kind of toy in his stall to play with. He’s so mouthy. I left his halter hanging on Subi’s stall latch (vs on the ground) after morning meds pre-breakfast and where was it when I came to turn out? In his stall. I can’t leave halters on one gate anymore because Nay Nay chewed Subi’s nice halter. So maybe he’d actually like a jolly ball? Or something else? Freak.