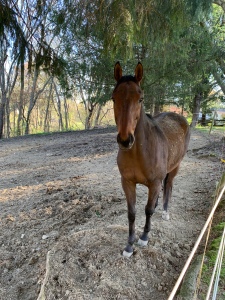 Watch out buddy, your life is changing!

In a brief update on yesterday’s post, I just wanted to let you all know, Nay Nay is tentatively scheduled for at gastroscopy on Thursday morning. However, if someone cancels prior to Wednesday at 5pm for next Tuesday’s Gastroscopy Clinic at my vet office, we will take their spot and go on Tuesday instead. Basically, the 2 appointments are close enough that I’m OK holding out until Tuesday, but no longer. The price next Tuesday is $240 vs the $385 I’ll pay on Thursday so… But, he needs to be scoped ASAP so… We’re basically waiting on one client who may no longer need the scope hence the potential for Tuesday, but…

That said, Nay Nay’s life is changing and he is NOT happy about it.

We have pulled all grain from his diet (he does get a handful with his sucralfate 2x/day because he’ll eat it that way) effective immediately. He was NOT happy when he walked into his stall last night to discover he was on a forage only diet. His grain meals have been replaced with alfalfa pellets (he’s not crazy about them, but alfalfa = good so the vet advised me to offer them anyway), Purina Outlast (I can’t remember if I was to keep him on it or not so he’s on it until the scoping), and chopped hay.  At Michele’s suggestion, I bought Triple Crown Safe Starch Forage and dumped a bucket of that in his feed bin. It’s fortified and grain free and he could live on that if needed (but $$$$). He was angry last night, but his feed bin was empty (he was gifted a corner feed tub last week because he liked to dump his bucket on the ground with his head… he was super pissed that he couldn’t do that with this). 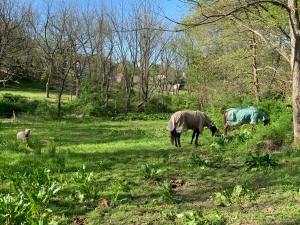 Grazing, the BEST part of the day

As angry as he was, the bin was empty this morning of all forage and powders. He didn’t eat as much hay as I’d like, but… He’s been pigging out on grass for 6+hours/day so… My vet feels right now any weight loss associated with cutting grain would be made up but possibly eliminating his daily colics. So, we’ll see. Still, he is ANGRY. 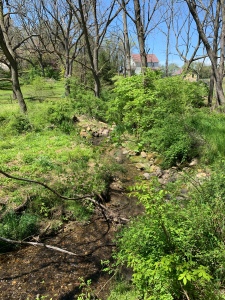 Former home of our culvert if you remember that saga… Very green this spring. Still haven’t heard from TPTB…

This morning, he was less than impressed that his bucket contained the same crap as yesterday night. I’m sure he won’t eat much (and I left his stall door open so instead of eating, he’s looking outside). But, he was hunting for carrot pieces so maybe he’ll eat the some.

But, Nay Nay should enjoy life because Wednesday into Thursday is going to suck. He must be off of all food/meds 12 hours prior to the scope. So, I’ll bring them in for dinner at about 8 to give him 2 hours to eat and then pull everything from his stall but water. He can drink water until 6 am and then nothing. I need to figure out turnout but I’ll either keep them all in until I’m ready to take Nay Nay to the clinic or we’ll turn him out with a muzzle taped closed. This is going to suck and there is a chance I might die. LOL.