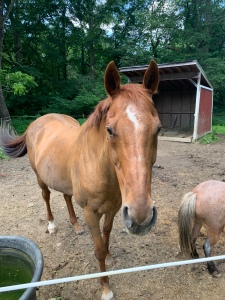 This blog is still called Three Chestnuts… And while I’m down to one, Subi is the original chestnut.

And he scared me big time on Friday night.

We were bringing the horses in and I got Nay Nay in his stall and went back for Subi. Erik had his halter on but Jiminy was still in the shed eating hay. “Just leave the gate open,” he said.

Subi and I got back to his stall, I had taken his halter off and he was starting in on the peppermints and chopped carrots in his dinner when Jiminy zooms by.

2 minutes later, Jiminy is back in his stall. 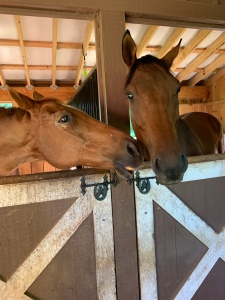 But Subi? He is standing facing Nay Nay’s stall, licking the wall. He stood like that for nearly 2 hours, licking the damn wall.

He ate a carrot, but wouldn’t turn around on his own. And he was breathing super hard. But NOT hot or overheated. Cool to the touch.

I texted a friend who asked, “Heart attack? Stroke? Can he walk? How is his balance?” So I grabbed a carrot and a halter and walked him out to the round pen and back. Nothing wrong with his balance. Or his ability to attack me for the carrot. 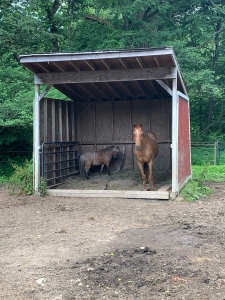 Back in the stall? Wall licking resumed and? Drooling. So much drool.

Next guess, minor choke on either a tiny piece of carrot or a mini panic attack when he lifted his head up to see Jiminy running loose. He never seemed upset, just…startled. He had barely eaten anything (1-3 tiny pieces of carrot smaller than a peppermint and 2 peppermints but choke is possible) but he definitely looked post-panic attack too.

Throughout the night I checked on him. At 11:45 he was munching his alfalfa and had eaten some grain though his stall wall was soaked. By morning his alfalfa was gone as was breakfast.

Since then? He’s been fine.