Nay Nay and I had an unexpected little break.

Did a lot of this during his time off

I noticed some puffiness in his right hind a couple of weeks ago and decided to sit and try and see if it resolved itself. He wasn’t lame, it wasn’t hot, but there was definitely about a half an inch of puffiness in a tendon/ligament near his fetlock. He also decided to mysteriously lose his right lead for the 2-3 rides leading up to this time… 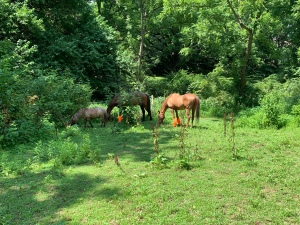 Anyway, I tried a bunch of stuff and in the end, the swelling stayed and Nay Nay continued to feel just fine and had no issues with his 2-week vacation. He was sound, happy, and didn’t seem to care what I did to that leg. 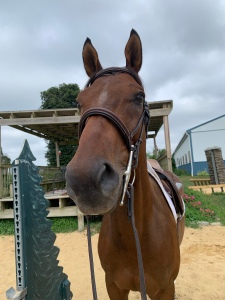 I finally touched base with the vet and it’s been diagnosed as fluid in the tendon sheath/ a windpuff. The prescription? Ride the damn horse. Right now we’re trying to see if fluid disappears at all when riding. It doesn’t during turnout and it certainly doesn’t get better standing in his stall. But, the thought is it’s probably just chronic and stems back from his racing days. He wasn’t heavily raced (14 starts), but his legs are a mess (osselets in his front right and he’s been pin fired in both fronts). Despite that, he flexes fine and is sound (my farrier is shocked at his range of movement in his ugly leg… it’s just that, ugly). Down the line he will likely need maintenance, but for now? The vet feels 3 days a week of riding is perfectly acceptable and he can w/t/c and pop over jumps without restriction. The fact is, he hasn’t taken a lame step during this episode, I was the paranoid one.

So do ear bonnets

So, yesterday after 2 weeks or so off, we headed over to the barn to ride. Nay Nay was a bit… up. My trainer asked me to change my bit my last lesson. I did and Nay Nay hasn’t been a fan. We first switched into a single jointed full cheek (thanks Michele). Nay Nay HATED that thing. I could not steer at all. I’ve never felt this horse heavy in my hands either (he was in a double-jointed loose ring copper mouth snaffle). After 2 rides of pure hell on the flat (fences weren’t as bad in that I could keep him IN the arena), I decided to give up and purchased a double-jointed full cheek for yesterday’s ride. He still dislikes the full cheek, but he doesn’t object to the mouthpiece. I’m actually wondering if our missing right lead may relate to the damn bit?

Anyway, he was a bit… spicy on the ground and blowing me off so, against my better judgement, I tossed him on the lunge line. And, he’s lost the ability to lunge. Especially to the right. Mostly it is avoidance, partially it is extreme weakness. But, I don’t think it’s injury. Injury wouldn’t prevent him from walking. If I had thought more clearly, I’d have brought my halter out and lunged in that, but… hindsight. I think it’s all the damn bit.

However, once I got his brain installed? (really, it was hot, I wasn’t lunging for energy, it was a training thing… Donkey Kong decided that listening wasn’t part of his vocab… Success was walking in a small circle around me to the right because listening is necessary) I got on to a dead quiet horse. Steering at the walk was MUCH improved as was everything to the left. The right still worked, but significantly better. We didn’t leave the arena once! 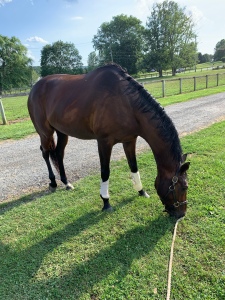 We ended with a lovely but brief canter to the left just so I could see where he was.

And Nay Nay picked up the quietest, loveliest canter ever. Recently he’s been scooting past the viewing deck because that’s a great place to speed up. If I stay closer to the jumps, he’s better, but… This ride? Quiet, lovely, relaxed. After he cantered quietly by the viewing deck, I finished the canter across the center of the ring and called it a day even though we barely cantered half the ring. Sometimes you just end on a perfect note.