It seems like all I do lately is try to get back into work. Between time off for ulcers followed by coming back and being lovely before time off due to random puffiness near Nay’s fetlock followed by crazy heat, we’ve had more off time than on. 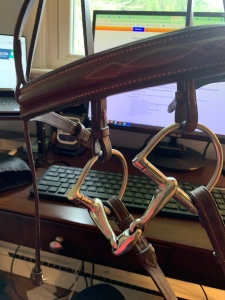 doesn’t everyone adjust tack while working?

And things have been a little rocky lately. Honestly? I feel like I’ve made a few too many changes in terms of bits and I’m tempted to go back to my copper mouth loose ring, but I don’t think the bit is the issue (though HATE is a word I’d use to describe the full cheeks we’ve tried). Something is going on…I’m not sure what. For now, bit wise, we’re just sticking with a double jointed d ring. No one is offended so that’s progress?

I rode Friday and Saturday and while I considered Sunday, thought 3 days might be a little hard given that I was sore and tired. Today (Monday) would be perfect but I’m iffy as to if the barn is actually open on Mondays…

Friday was… interesting. We longed first in the indoor in 100% humidity. The left was OK but immediately Nay said nope, I can’t do this to the right. It’s hard, I don’t know how, I just CANNOT be asked and did the stupid longe evasion tricks (thankfully not Subi’s turn and bolt of yester-year—story for another post—but turn and stop and face me crap). Unlike last time, I got angry. Maybe he’s sore, maybe longing hurts, but I’m literally asking him to move forward at any gate so he CAN walk he just nope out of it. I became mean mom and suddenly? We longe again… I think all the time off in leading to some boundary testing (but also some other stuff). We halted and moved off at all gates 4 or 5 times without issue before I ended that session and hopped on.

I got on and? Power keg. Despite the energy on the line (no bucking, just energy), trotting was like this forward moving thing? He was forward vs up/down at the trot and my arms hurt from reminding him pace every x number of strides. After a million circles, eventually we trotted without as much enthusiasm… despite thunder in the background.

Yet to the right? he’s just not there. So weak. So, I don’t know if there is something bigger going on or if the time off just exacerbated his weakness to the right? We worked and tried staying straight but it’s so damn hard!!

Then the canter. The left was… electric until he realized that being stupid meant circles which are hard and tiring. Then the right? Didn’t exist. I let him canter wrong at first then eventually did get the correct lead and as able to hold it once around with a circle. It’s weak and slow but it feels physically ok.

Saturday? We restarted on the line where in the first minute Nay thought about trying ‘nope I can’t’ but a quick reminder to the left shut him up for good. Then we were fine.

We finished up our ride outside where he decided to react to everyone who came near us. So we trotted and trotted and trotted. It wasn’t the forward trot of yesterday but rather a more up and down one that required leg and focus. Eventually the popping when horses came near (all 3 of them…) ended and we trotted more for good measure.

I found the outdoor exacerbates his right side weakness as there is no fence so I push out with inside leg and don’t have and outside rail/wall to help. Plus the deeper footing… either way, we made it through the trot.

The left lead canter was lovely, some of our best in a long time. Right lead? Gone. Couldn’t find it. I gave up before we both got frustrated. He picks it up on the line without issue I’m struggling so much riding. I’ve come up with the following possibilities: 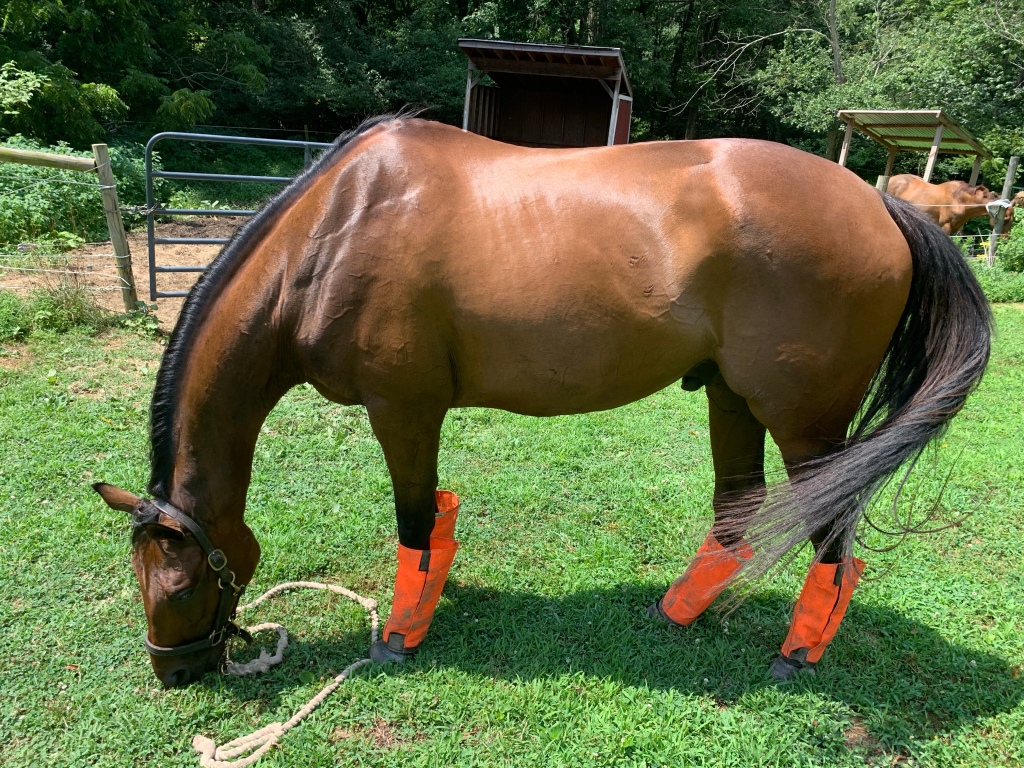 So that’s where we’re at. I’m not sure if more is going on than just weakness or something listed above… I’m seeing my trainer Thursday and we’ll talk more then.

Nay Nay this winter… NOT the same body shape… Wouldn’t surprise me it saddle fit is starting to come into play. There’s a reason I didn’t spend much, but bought an OLD well made saddle… Granted issues are one sided.