My lesson this past week was moved from a gorgeous Thursday evening to the disgusting humidity of Sunday morning, of course. Despite the early time, it was already ridiculously hot and humid and me, being smart, left my water in the car… this post is also free of relevant media… 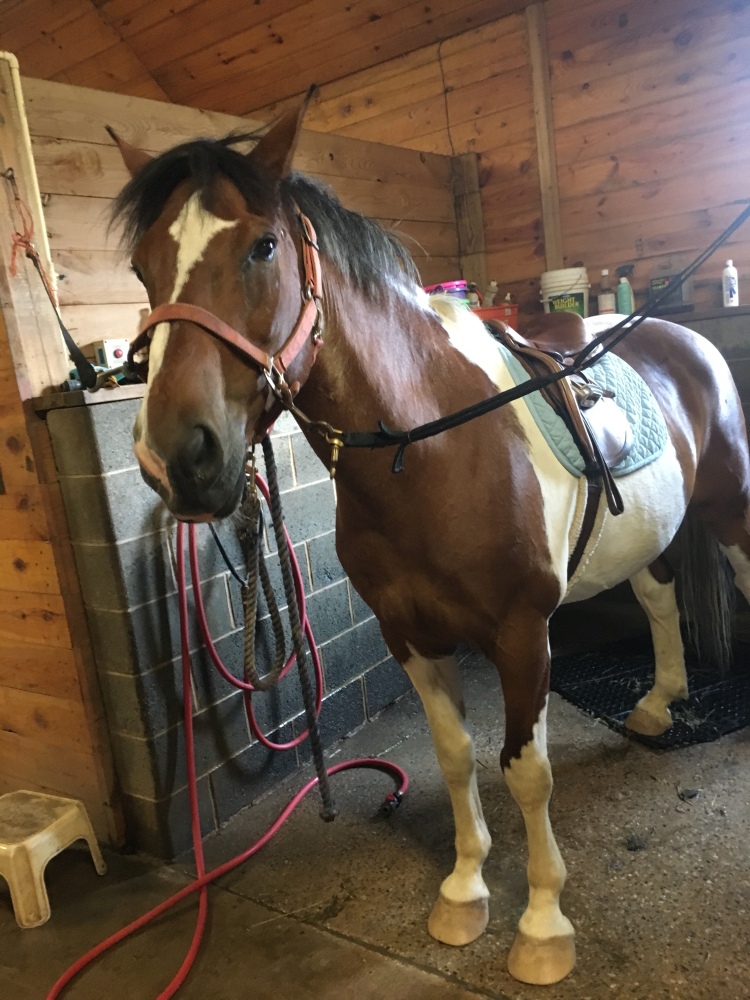 Warming up, the focus was on appropriate trots and emphasizing the difference between a nice working trot and a slowing to an appropriate trot to sit. The emphasis was also on slowing the trot BEFORE I sat rather than sitting and then slowing. So, using my body, hands, and post to control and slow the trot to where I wanted it and THEN sitting. That said, I’ve been having issues with my back lately and even the most comfortable trot (which Ranger really does have) was not welcomed kindly by my back. We worked for a while going back and forth from a forward working trot to a super collected sitting trot. My back protested.

When it was time to canter, I’ll admit, I could NOT sit to save my life. I think I was trying to save my back and found myself forward in more of a half seat than normal. Eventually I got my body back but it ached. A lot. The canter was nothing spectacular and my arms were doing something funky and the more I focused on it, the less natural everything felt. Do you ever feel like the brain just goes into overdrive sometimes? So frustrating. 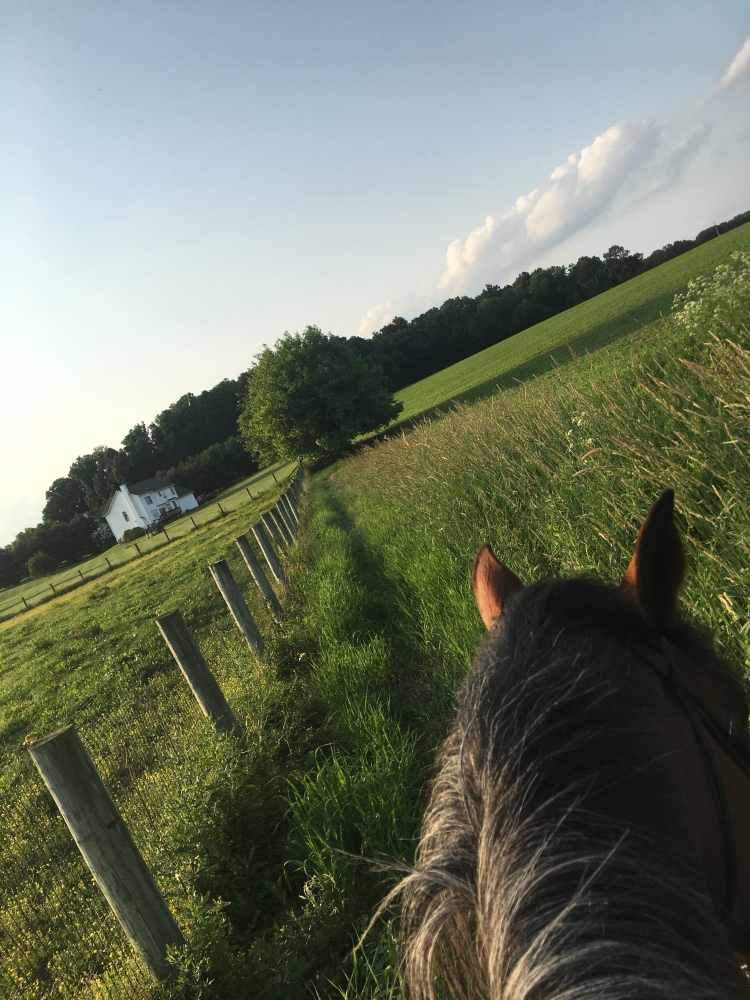 We warmed up over our log jump. The goal was just to pick up a nice canter and on the landing, NOT RUSH (hahaha) and turn based on whatever lead Ranger landed on and re-approach the jump. Simple enough with the exception of the not rushing (the not rushing to the jump, fine, the not rushing to turn was a different issue in my brain). That said, it was fine the first 5 times, the first 3 we landed on the left lead, 4 and 5 the right lead. After 5, I just blanked at what I was to be doing I cantered straight… But, the spots were lovely to all the jumps at least until I got lost?

That said, we moved on. It appears my focus wasn’t the point of that exercise and I passed the test. Lol. So from here, the goal was a right lead canter over the inside single going away from the road around to inside line. The whole thing just didn’t work. I mean, we going through it, but with a whole lot of drift. First I turned too early to the first jump? Which I NEVER do. And then to the in of the line I didn’t keep enough right leg (OMG the right leg) then I needed to ride up to the out which we still died out to because the drift (first left then right OMG right) then chipped and the jump wasn’t exactly a tiny oxer though not huge. Still, he saved my butt and got a huge pat.

So we did it again.  I managed to stay out longer and the line to the first jump was SO MUCH BETTER though the spot was NOT as good. Seriously, WTF? I get really angry when miss spots. Since I don’t often. Ugh. Then the turn to the inside line was better but even applying the damn right leg someone still wanted to drift but the rest of the line was better and after fighting to the first jump, we only had right drift the rest of the way (hey, better right drift then right AND left drift) but someone got off my right leg enough to jump the center nicely from the center of the fence.

But, third time was the charm. Having perfected the first fence, I was able to put my energy into fence 2 and turning the corner, lined him up to the center of fence 3, cutting out the drift early and getting him off his right shoulder. We had the pace so the rest of the line was just a waiting game and thankfully I didn’t screw anything up. 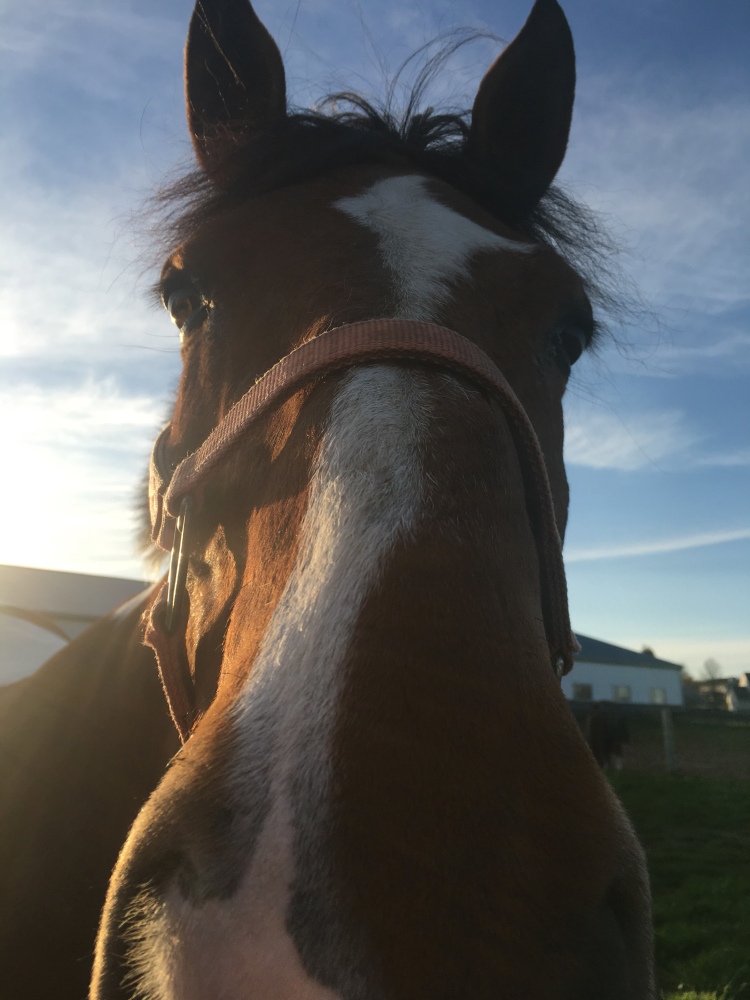 Of course, instead of letting me walk, I then hear “canter him around to the other inside line” which I look at and think there much be a different inside line because the out of the inside line is an oxer that is probably 3′ or close to it. So we canter around, skip the first jump and circle when I don’t see another inside line and then re-approach. See, it’s not that we don’t jump large fences, but most of the time when we jump large fences, they’re not oxers. We tend to keep our oxers to 2’6″… So I hold my breathe, maintain a steady pace, start approaching, realize I need to move up for the first jump, and then throw my body. See, the first jump wasn’t huge. 2’6″, maybe a bit bigger, but nothing scary. We took out the top rail. Then I continued moving Ranger up who was game, and then realized we were going to chip at that pace, woah-ed and we jumped the scary oxer perfectly. WTH? The line was ugly. I did way too much.

We did it again. Once again. I rushed my body at the first fence. Once again, the oxer was perfect. I don’t get it. Why was I jumping the scary fence well and the easy jump not? Probably because I was more likely to die if I rode the scary fence poorly, but…

The third (or 4th I don’t remember), I finally made myself count 1, 2, 1, 2 the entire way to fence 1 just to occupy my brain and NOT RUSH THE DAMN fence. Needless to say, I finally didn’t rush the thing and the line was lovely and Ranger got a massive hug for being the most incredibly horse there is. 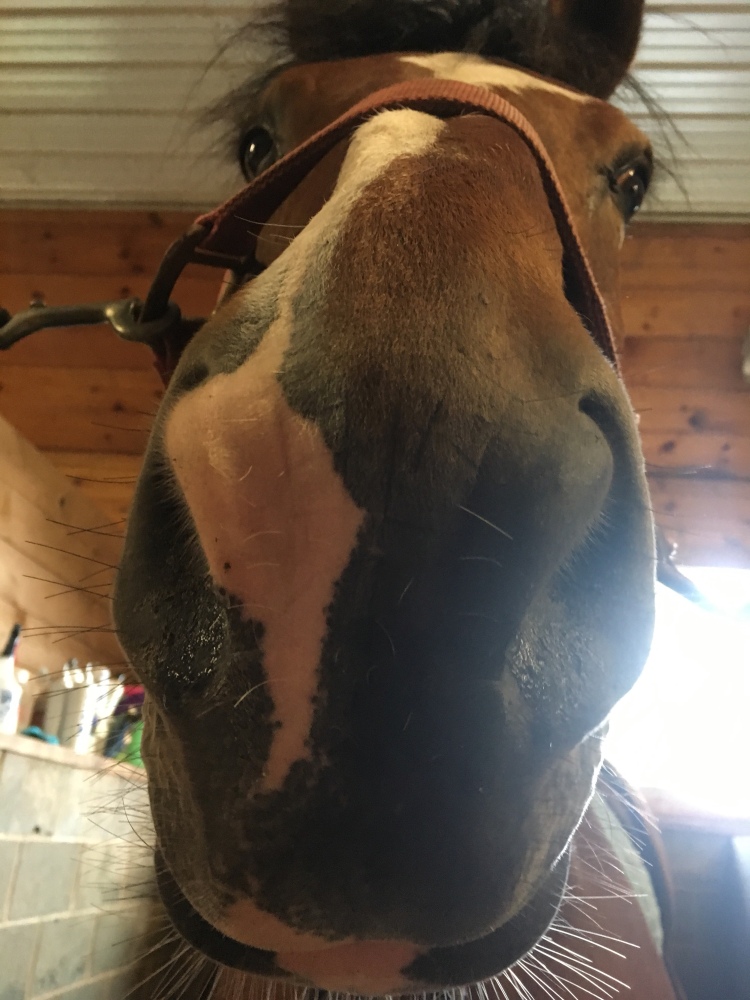 Assuming we were ending there, I relaxed. Until I was told to pick up my left lead canter and canter over the outside single which was another massive oxer. I think I must have given my trainer a look because her response was “Yes, these are all bigger than we normally jump, go jump it anyway.” The one was at least 3′ and looked bigger but may have just been more solid than the other. So I pick up a canter and start counting immediately. About 10 strides out I see my spot and think shit, this isn’t good. I have a nice, quiet canter. The jump is huge. My canter is super quiet. Don’t I need more canter? But the spot is there… See, this is the bad thing about seeing distances… So I just decide to throw caution to the wind and trust that Ranger will save my butt and don’t change my pace and hope leg at the base of the fence will be enough. He easily carries me over probably the easiest fence of the day… from a quiet, quiet canter.

So we do it again, only change being that I’m to take a deep breath (hahaha when I am about 6 strides out) and hit the same perfect distance that I again see 10 strides back. With the deep breath, it’s even more perfect.

There was no need to gallop into big scary fences. Just breathe.

And try and be brave.

Ranger is the best.