Just checking in without much to update. It’s been too warm and rainy and the likelihood of this barn ever getting installed are slim to none. My mood is, quite honestly, not all that great either thanks to the weather, migraines, and an unlikely mild concussion. 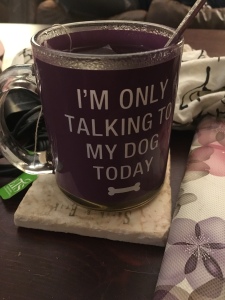 Today is my first day back at since before Christmas. I was due back yesterday, but 2 days of horrific migraines made today’s mild migraine feel not so horrible. I’m still not exactly thrilled to be back. The joys of this college town? They cut down half the trees on the south green, put out a bunch of temporary fences, and are about to do some utility work… Yeah. And Saxby’s closed. So, it’s depressing. Sob. I miss Saxby’s.

On a positive note, I did purchase stall mats (I will probably buy 4 more to put outside of the non-existent barn). $26/ea. Yay for price shopping! The one feed store had a massive order of seconds, and, to be honest, they’re all completely fine. I don’t see one thing wrong with them. They were shrink wrapped and everything. So, I bought them. And I’ll buy more. Completely worth it. So much better than TSC $45/mat.

My husband also bought me a feed cart for Christmas! Or rather a utility/garden cart that might be turned into a feed cart. In the interim, it’s being used as a cat fort.

I did ride Ranger sometime between Xmas and New Year’s and had a great lesson. But, time has passed and I just can’t remember enough details to actually write about it.

This might be because the next day, I sort of, kind of, maybe got hit in the head by a pry bar… I was in the garage getting soup out of the freezer and a pry bar fell and clocked me in the back of the head… I saw stars, developed a nice black and blue mark, and days later, the right sided migraines began. See, the migraines are ALWAYS there, but they’re left sided. So, now, a week later, I’m dealing with some extra significant migraines (a couple debilitating ones) and concussion symptoms/post concussion syndrome. Because, seriously, this was EXACTLY what I needed. 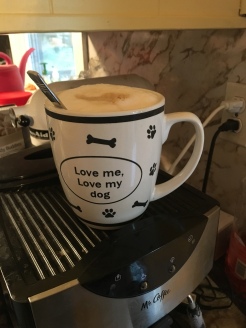 best pup in the world

I try not to use this blog to vent about migraines (which are pretty much a chronic daily thing), but most of the time I can deal. But then I can’t when they are combined with others symptoms or stuff or are more than the usually regular ones… And then when my idiot neurologist changes my abortive medication from a 30 day to a 90 day (at same amount) and I’ve been out of meds with 45 days remaining without notice… 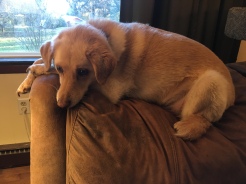 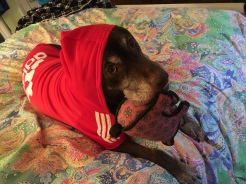 Anyway, hopefully next week I’ll be back to blogging with some enthusiasm! Until then…