Finally. The moment I have been waiting for. There are ponies in my barn!

It took a lot of hard work (much of which while I’ve been fighting a cold from hell), but the barn is up and running! Well, mostly, we still need the electric to be hooked up, but that may need to wait until spring.

Friday, after panicking all day about HOW to build Jiminy a stall (my initial plan didn’t pan out) and bothering Michele, we purchased gates at Tractor Supply for a whopping $22.49. Yes, you read that correctly. Thanks to a 10% off coupon and 2 gift cards, I spend $22 on gates. We moved out mats in to the stalls and run in when we got home (I’ll probably add another into the run in, but I was in the midst of an asthma attack that nearly took me to the ER) and called it a night.

Saturday, we got up bright an early, purchased straw in case the anticipated 1-2″ of rain left us with crazy pooling prior to the flash freeze, put up gates (10ft and 14ft), put of bucket hooks, hay net hooks, and salt licks. Then stalls were bedded down. Only thing left was… 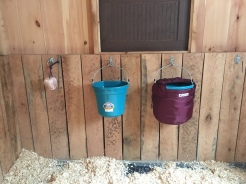 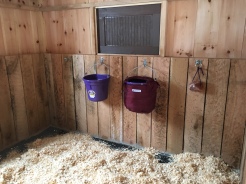 The transition into the stalls was NOT easy. I’m not going to lie.

The handsomest, but most stressed, horse

Subi reared 4 or 5 times walking to the barn and was a nervous wreck inside. Jiminy was OK, but feeding off of Subi. Batt? Well, he found his dinner and his hay and life was pretty damn good. I checked on them multiple times. The big boys had the outside top Dutch door open until the rain started coming down pretty hard. Subi got a little wet and was less than thrilled that I closed him in. Batt didn’t actually care. They still had the top half open to see Jiminy under the overhang. 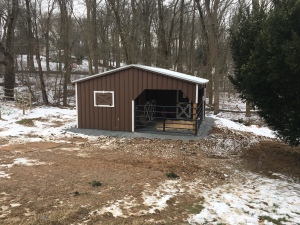 By the next morning, they’d all survived. Subi managed to eat some hay (5-6lbs), but never touched his dinner. Typical. He did have a nap as when I first appeared there was a bang and commotion before he appeared looking disheveled. I’ll take it. Batt emptied his hay net and was annoyed at my lack of hay net filling abilities… Jiminy ate half of his 2 flakes which was all he really needed. Batt, I learned, is a complete PIG in his stall. Subi pooped in his water bucket…

I turned out and they were SLIGHTLY better behaved, especially after Subi and I had a quick discussion. Subi also only ran around for about 7 steps before stopping so? Progress. He failed to eat breakfast in his stall but ate it in the field.

Last night? Prior to coming in, they were all huddled, cold, in the run in. Subi marched to the barn like a gentleman. He knew where we were going and he knew it was warm. He didn’t eat his dinner between 5 and 8, but ate it sometime overnight. He also ate most of his hay and seemed 100% more relaxed. In a few days? He’ll have the routine down. Batt? Batt likes stall life but feels he needs more hay. Not my fault he’s a pig and 15 lbs of hay isn’t enough for fatty. He also parks himself by the round bale the second he’s back outside…

Last night it was cold. I know that. Single digits and wind chills well below 0. At 9am, it warmed up to 9 with windchills at -12. I’m SO HAPPY the barn is up and running. I do need ideas to block more wind for Jiminy as the gates do let wind in. Or, at least the front gate. The side gate is pretty well blocked with a tree and fence close by.  Any ideas?