Not too much to write about. I’ve basically been sick since my last post (bronchitis or possibly pneumonia though we didn’t do x-rays so don’t actually know) so not much has happened. Still recovering… Haven’t ridden in weeks due to being sick and with a high of 17 this week, chances are I won’t be riding again… Haven’t cancelled 3 lessons in a row in a super long time. I miss Ranger. 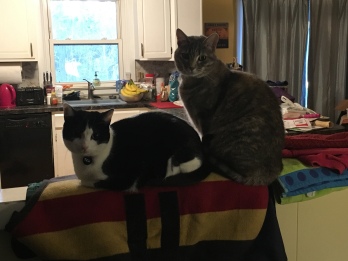 My nursing crew (sleeping on the job)

The boys are starting to get into a routine. Some days Subi is a gentleman to lead, other days he’s a rearing mess (more at the end)… But, he seems to be OK in the stall. He more or less eats his dinner (we’ve been feeding breakfast outside) and picks through hay. Sometimes he drinks, sometimes he doesn’t.

Batty is a stall pig, but seems to love his stall. He was inhaling too much hay so he was downgraded from the 2″ hay net to a 1″ hay net. That hasn’t stopped him… But, thankfully he still has a little hay left in the morning.  He has free choice hay outside and stands and eats all day. He really doesn’t need to eat 15+lbs of hay in his stall. Not sorry about limiting his hay AT ALL. He’s a pig. He’s also a messy pig. I switched him Saturday from shavings to pellets and HOPEFULLY that will help. Thankfully the pellets aren’t dusty either so… With his heaves, I worry about stalling in general, but he seems ok. I do want to start steaming his hay, just need to build him a steamer…

Jiminy is fine, but likes to poop RIGHT under the storage room door. Maybe next weekend I’ll add another mat there so that I stop messing with the screenings. Thanks Jiminy, very inconvenient.

I also can’t wait until I have electric. Doing stalls by headlamp isn’t the easiest, but oh well. It works? 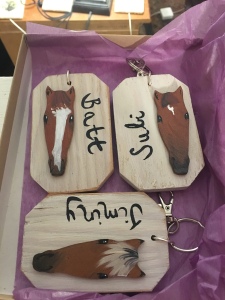 Yesterday, the farrier was out and the boys had there feet done in their stalls. Subi was VERY good considering the change of routine. My farrier was very happy not to be trimming on a hill or in the mud. Batt had several abscesses in his front left — not surprising–but overall, everyone was pretty good.

Turning back out after trimming was another story… Subi was a jerk, and proceeded to take his rearing to another level. I did a little ground work walking to the field as I could feel him on edge (he acts up more when the ground is mushy–he doesn’t like the unstable ground), but outside of the gate he proceed to explode, rearing about 6 times and freaking Batty out. I did get after him and maybe overreacted, but… He exploded once he was free (after halter was off and I was safely out of the field — he’s good about that). When we brought in a few ours later in the dark, the ground was harder and he was a bit better. I halted and backed him every once in a while. He rushed the hill where the footing is a bit…slippery, but otherwise was decent. I did extra halts and backs anyways. This morning he was…strange. Extra slow and cautious. I felt like I had to drag him to the field. I’m thinking he’s feeling yesterday? Regardless, we’re doing halts and backs every.single.day. while walking to and from the barn until he can contain himself.

5 thoughts on “Catching up”