First, as an update from my last post, my horses are IDIOTS. I put their regular bale in my existing Shires large net (I’m not sure if it’s this net or if it’s a discontinued full bale net, but either way, it easily fits a full, 2 string bale) in their feeder. Idiot horses ate 5 lbs in 2 days. 5lbs. They CAN and DO eat from the 2″ holes in stalls or elsewhere, but NOT in the feeder. So, small holes are out. I can’t risk Subi not eating. So I ordered a large hole net and we’ll give that a try. I’m just trying to keep the hay in the feeder so maybe this will work? Idiots. 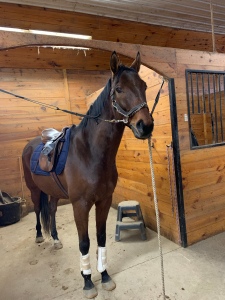 I was able to ride last weekend but due to circumstances, I only rode saturday. I had a great ride! And a terrible ride. It really depended on how you analyzed the ride. I really need my trainer back for a lesson…

The weather was really nice and I considered riding outside, but I was a chicken and the other horse out there was not one that would provide a calming presense… So, I stuck to the indoor. That said, all the jumps were removed so I was left with some poles and plain standards to work with which was fine. I left the trot poles up, and set up 3 cross rails.  In the end, I had a poles on the long side, a cross rail on the other and 2 cross rails on figure eight.

When I got on, Nay Nay was quiet but had energy. I decided just to trot. And trot we did. Around and around and around. We circled and added poles and circled. Eventually I decided to add in the cross rails and all was good. He was a star. We did all our jumps and was perfect.

After trotting, we picked up the canter. For some reason, now when we canter to the left, Nay Nay starts tossing his head as we pass the in gate… He’s fine, but throws a tiny fit… I decided to throw my hands at him (it worked to the right to help fix our right lead canter) and fit was over. Finally. We cantered a nice circle and walked. Continued to the right and had a lovely right lead canter. He’s gotten SO MUCH STRONGER to the right. 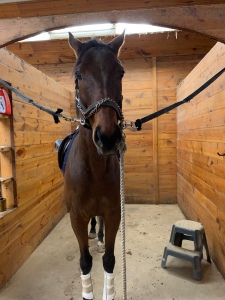 While he was getting tired, I decided we do all our jumps a few more times. We did our first circuit one time and he was great. Then came direction 2. Oy. Issues. We did our first fence and it was fine, then as we were coming over our second jump? Forrest walked in with his rider and Nay got distracted. We made it over, but I failed to realize just how distracted he was. We continued to our last jump and headed right to Forrest and nope. Nay full out said, THERE’S A HORSE IN HERE!..as we were trying to get over our cross rail and crashed and burned… We should have been able to get over it but Nay backtracked instead and took it down. So I had to get off, put it back up. Then Nay was convinced we couldn’t. He was tired and done. I finally hopped off and walked him over and fine, he was over. After I got him over, I put it down a hole (it wasn’t big, but I made it slightly smaller just because), and we jumped it a couple times and called it a day.

I’m made at myself partially because 1, I should have stopped before I got to the stopping point 2, I should have realized he was distracted and overrode to that jump and 3, I should have predicted all of this stuff. I wish I could have ridden Sunday, but I had pre-existing plans so that was out before I even got on Saturday.

Still down on myself for all these mistakes I’m making!

10 thoughts on “Jumping (through) distractions”